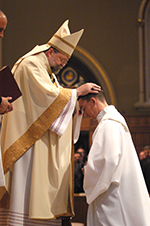 In early August of 2000 I left my hometown of Grand Rapids, MI and entered the Congregation of Holy Cross. It was a decision that changed my life. For the better part of 6 years I ate, slept, studied, prayed, attended Mass, played basketball and socialized alongside my brothers in Holy Cross while living at Moreau Seminary. While it has been 8 years since my ordination, I still recall the excitement of living in my new home, named after the founder of the Congregation, Blessed Basil Moreau, C.S.C.

While I knew nothing about Fr. Moreau at the time, I would certainly learn. Fr. Moreau was born in 1799 and ordained a priest in 1821. Yet, what ultimately led him to found the Congregation was in response to what he witnessed following the French Revolution. Prior to the Revolution, the Catholic Church had run virtually all of the schools, so when the Church-run schools were closed during the Revolution, there was an entire generation in France that went uneducated not just in the Catholic faith, but in the basics of reading, writing and arithmetic. In response to this tremendous need for education, Moreau was inspired by God to found Holy Cross. 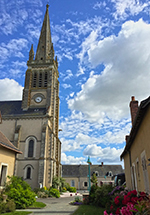 Aware of this history from my time in the seminary and mindful of my role to teach and proclaim the Gospel as a priest, I hoped to experience the life of Fr. Moreau by coordinating a pilgrimage that welcomed a group of university colleagues from Notre Dame to see the sights and sounds of Holy Cross in France. During our time together we spent days retracing the steps of Fr. Moreau from his birthplace in Laigne-en-Belin, France to his final place of rest at the Shrine dedicated to Fr. Moreau in LeMans, France. 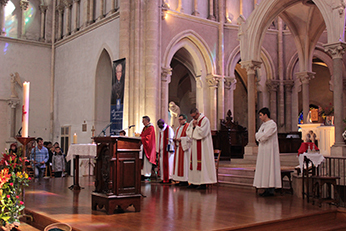 Reflecting upon what I've learned from the opportunity to walk as a pilgrim through France, I can't help but to return to the fact that this work of God did not begin in a major city like Paris or have a completely smooth path. It all started with Fr. Moreau responding to the needs of a community devastated by the Revolution. Fr. Moreau actively used his God-given talents to serve those around him in charity, and maintained the tenacity to persevere when challenges came his way. 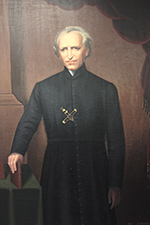 As a Holy Cross priest in 2015, I have the benefit of seeing aspects of Fr. Moreau's vision being realized. We have roughly 1,500 brothers and priests working in schools, parishes, staffing seminaries and missions in 18 countries spread across five continents. We have successful apostolates throughout the world, but it all started from a small place in France with a sincere desire to respond to the needs of the community in which Fr. Moreau found himself.

Looking back on my time at Moreau Seminary, it's fitting that the place bearing his name continues to call young men who possess the traits of faithfulness, perseverance, charity and hope. My prayer is that Holy Cross religious may continue to have the awareness Fr. Moreau possessed toward those in need and the willingness to respond with such conviction.

Fr. Pete McCormick, C.S.C., professed Final Vows in the Congregation of Holy Cross in 2006 and was ordained a priest in 2007. Since his ordination, he has served as the Rector of Keough Hall, and he was recently named Director of Campus Ministry at the University of Notre Dame.