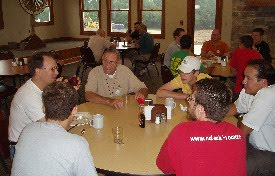 Today the 49 seminarians from Old College and Moreau Seminary along with their formation staffs left Notre Dame for their annual camp to begin the new year of formation. In Holy Cross, the tradition of starting the new seminary year with a camp dates back to 1905 when the seminarians spent two weeks at Harper's Ferry in Virginia. Back then, the seminarians did honest-to-God camping.

Today, the seminarian camp is entering its sixth year at the Congregation's retreat center in LaPorte, Indiana. The seminarians affectionately refer to the week-long camp as "Deer Porte" in honor of the camp's previous home at Deer Park, Maryland. The camp is a part orientation for the new seminarians; part retreat with spiritual talks, communal prayer, adoration, and time for reflection; and part camp with games and events to build community among the men. 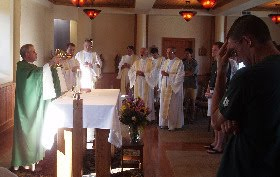 Each year's camp has a theme related to the tradition and spirituality of Holy Cross. This year's theme, chosen by the camp's "mayor" third-year, temporarily professed seminarian Matt Kuzcora, is "Called to Walk in Their Company." He wanted to reflect on the saintly men who have gone before in Holy Cross, paving the way for the next generations.

The theme comes from the last lines Constitutions of the Congregation of Holy Cross, which is the rule that governs our religious life and ministry in Holy Cross. "The footsteps of those men who called us to walk in their company left deep prints, as of men carrying heavy burdens. But they did not trudge; they strode. For they had the hope. It is the Lord Jesus calling us. 'Come. Follow me.'"

Come. Follow us by staying tuned to the blog over the next week for updates on camp!