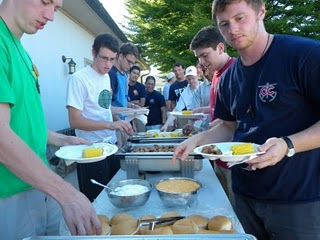 Reporting from this year's seminarian camp is Tim Singler, a second-year Old Collegian. He filed the following report on the first few days of camp:

With the beginning of the camp, I realized that I had missed my brothers in the seminary more than I had thought. It has been great to see everyone again and finally catch up on the various activities everyone participated in over the summer. It has also been great to welcome the new guys into our community and get to know them.

The week began with a brief session, giving the history of the camp and laying out this year's schedule. Then we all gathered for mass in the chapel located on the grounds. Fr. Peter Jarret, CSC, the rector of Moreau Seminary presided at the opening Mass and challenged us to be transformed by God's grace this year. After Mass, we gathered around the pool for a wonderful cookout dinner. 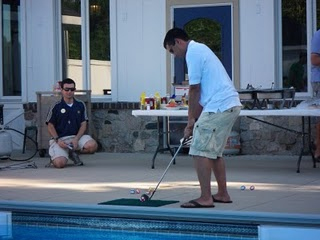 As we sat around and conversed, the annual pool golf challenge was held. Old College's own Brian Kennedy won as he landed closest to the green.

Our first full day of camp, Friday, featured a day full of activities to keep busy. The morning consisted of formation meetings planning for the upcoming year. Then the newest members of the seminary had a liturgical orientation so they could learn how to pray the Liturgy of the Hours. 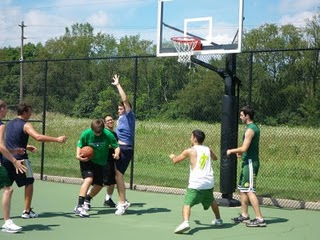 The feature event of the afternoon was a fierce game of basketball. With the temperature on the court at 90F, the intensity of the game soared with the rising temperatures. There was no better way to cool off afterward than jumping in the pool.

The keynote talk of the camp, given by Fr. David Guffey, CSC, highlighted the evening. He spoke on the camp's theme "Called to Walk in Their Company," telling stories of Holy Cross men who have inspired him in his religious life and priesthood. It was inspiring to learn the stories of some of the "unsung" heroes in Holy Cross. It is in their footsteps that we are hoping to follow.

Stay tuned for more updates from camp as it continues to Wednesday, August 18.