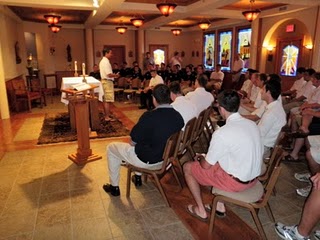 Deer Porte, the annual seminarian camp, came to end earlier this morning as the seminarians packed up and headed back to Notre Dame for final preparations for the academica year. Credit for the successful camp this year really goes to Matt Kuczora, the third-year seminarian who served as the camp "mayor." Before camp came to a close, there were a few final exciting events including the relative new tradition of tennis ball golf. 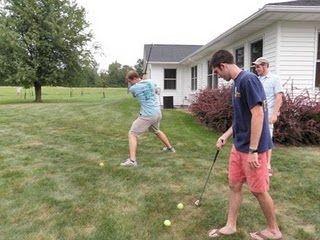 Yes, you read that correctly -- tennis ball golf. No one is quite sure how the tradition started, although it is a definite nod to the games of golf seminarians would play at the old camp grounds in Deer Park, Maryland. The point is to hit a particular target -- like a bush, tree, or wall -- with the tennis ball using a golf club. It seems to be a growing tradition as about twenty guys played. 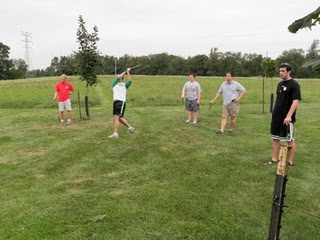 Later that afternoon saw a longer tradition continue as the finally professed members of Holy Cross came out from South Bend and Notre Dame to join the seminarians for the closing dinner. Over 120 members of Holy Cross were here for the festivities, which included a blessing of the men in formation by Rev. David T. Tyson, C.S.C., the Provincial Superior of the Indiana Province. The dinner included an incredible prime rib. 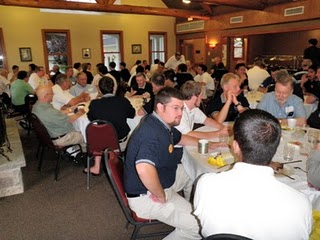 Following dinner, once the sun went down, the seminarians gathered for fireworks and then a bonfire that was so hot the circle of chairs had to keep being expanded further and further away from the fire. The bonfire was ceremoniously lit by the mayor who chipped a flaming golf ball into the wood. Then, the following morning, with morning prayer and Mass, the sixth annual Deer Porte came to a close ... til next year!