Holy Cross in the Philippines

Holy Cross in the Philippines 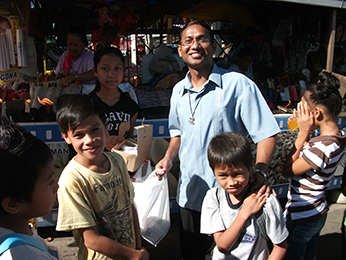 In my travels, as I visit houses of the Congregation, I am often asked about Holy Cross and Family Rosary in the Philippines because people have heard that Holy Cross founded our first community house in Manila four years ago.

Few know, however, that our history in the Philippines goes back almost to the beginning of the last century. After some years as Bishop of Dhaka in what is now Bangladesh, Most Rev. Peter Hurth, C.S.C., left that post in 1909 and was assigned to be the Bishop of Nueva Segovia in northern Luzon. He served there many years, and he was buried in his diocese in the 1930´s.

Manila was a stopover spot for our religious en route to Bengal, so when the Japanese invaded and took the Philippines during World War II, some Holy Cross religious – five, I believe – were there. They were captured and kept in prison camps. They were nearly starved to death by their wardens before they were rescued by U.S. paratroopers in the last months of the War. I have heard that they gave admirable and heroic witness by their daily lives. 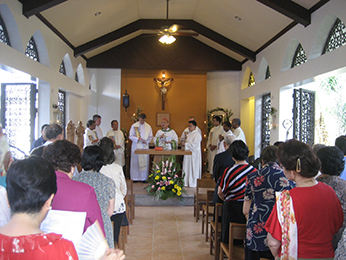 Six years later, in 1951, the Servant of God, Father Patrick Peyton, C.S.C., began the Family Rosary Crusade in the Philippines. I think it was "love at first sight" that he felt for the Filipino people. These people who call themselves "el Pueblo Amante de María" (the "People Beloved of Mary") captured Fr. Peyton's heart with their warmth, innate humility, missionary zeal, and great faith.

Especially in the later part of his life, Fr. Peyton spent several months each year in the Philippines and travelled the whole country conducting his diocesan missions. I wonder if he might have intuited the importance that the Church in the Philippines would soon have, in Asia and in the world. It is clear that his mission played a significant part in a renewal of the Marian devotion that is a key element of the strong faith that Filipinos share in so many places today.

After Fr. Peyton died in 1992, people began to insist that Holy Cross formally found the Congregation in the Philippines to continue this legacy. This finally became a reality in 2008, when our South India Province founded our first house in Manila, with Fr. Roque D´Costa, C.S.C., as superior. 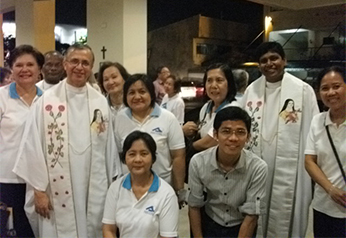 Fr. Roque is the Director of Family Rosary of the Philippines. In addition, several other religious are assigned to studies in Manila. With the grace of God, we hope we may soon assume other pastoral responsibilities and even receive seminarians. I believe we would grow quickly there! Please pray for good discernment.

The faith in the Philippines is strong and vibrant and a treasure for the world. Filipino overseas workers share their gifts in parishes on every continent. Moreover, the Philippines is and must be a launching point for the evangelization of China.

Does the Lord want Holy Cross to be a part of that effort to spread the faith in China through the growth of our mission in the Philippines? Please pray for this mission!

Fr. Jim Phalan, C.S.C., is the Director of Family Rosary International, which is a part Holy Cross Family Ministries. HCFM was founded by Servant of God Patrick Peyton, a Holy Cross priest who had a special devotion to the Blessed Mother and preached that the "family that prays together, stays together." Fr. Phalan will be writing for the Spes Unica Blog each month to share with us the great work of Family Rosary International, yet Family Ministries is one of the creative ways that Holy Cross continues to reach across borders of every sort to spread hope. Learn more about the missionary work of Holy Cross.