Holy Week: Awaken from our sleep

Holy Week: Awaken from our sleep

We conclude our Holy Week homilies this Holy Saturday with the homily that Fr. Kevin Grove, C.S.C., Associate Pastor of Christ the King Parish, South Bend, gave this evening at the Easter Vigil in the parish.

So what exactly happened when Christ spent those days in the tomb? We speak of this each time we say the Apostles ' Creed, "he descended into the dead," before he rose again on the third day. And now that we stand in the full light of his risen splendor, it is well worth asking what Christ was doing in those intervening days. And the first answer is that he had passed away and his earthly body lay wrapped in a shroud in the tomb. But since the earliest times of our Church, people have given real reflection, as should we, to those intervening days between his death and what we know to be the first light of the Resurrection. And, in an ancient homily that was preached on Holy Saturday, the preacher recounted an interaction between Jesus, who was in the tomb, and Adam.

You see, the homily explains that after Jesus died, the earth was silent and still. The King of kings had fallen asleep in death and the whole earth in a way kind of held its breath. It was sort of like a lull before the most magnificent storm; but at the same time, some other place was much more tumultuous. And it doesn't get any better than this, that ancient writer said that the very "gates of hell trembled in fear." Yes, in that intervening time, eternity itself was being changed; the descent into the dead was going to mean something for all of the dead. In a literary image of them I like very much the big stone gates of Hell have these words on them: "Abandon hope all ye who enter here." I imagine that at the moment the God of the universe died a human death that those gates were what shook to their very foundation; the grip of death that had been holding humans since Adam and Eve, was about to be shaken and broken. Yes, the gates of hell trembled in fear because Christ was on his way. Christ went down to hell to break the bonds of death.
The ancient spiritual wisdom recounts, though, a very tender moment in that place. What happens next is an interaction between Christ, the new man, and Adam the first man who represents all of us. The text says that Jesus went up to Adam bearing the cross; he was holding over his shoulder what had been the instrument of his death the day before. And Adam, without having met Jesus, could see the difference; Adam and Eve had caused the first sin of all humanity by disobeying God, by eating the fruit of one forbidden tree in paradise. Christ saved them by means of a tree, one of torture and shame, but nonetheless one on which he was completely obedient to his father. Christ came into Hell bearing a new tree of life; he came to show Adam that only one hope existed for him and for all: and that hope was in the Cross. 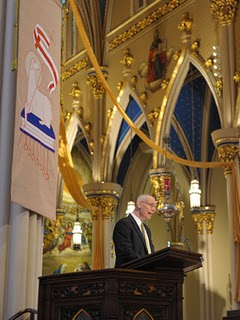 And in that moment Adam actually recognizes Christ for who he is; he sees his creator looking like him, in an image like his own, strikes his chest in terror, and cries out to everyone around him, "My Lord be with you all." And Christ's response to him and all of them was, "And with your spirit." Christ the conqueror, the mighty God who had been killed, is ever Christ the shepherd; and he walks over to Adam the first sheep ever to be lost, takes him by the hand, and lifts him up to new life, saying "Awake O Sleeper, Arise from the dead, and Christ will give you light!"
And at that moment, Adam, Eve, and all of humanity became what they were created to be. Jesus says to Adam, "I did not create you to be held a prisoner in hell….you were created in my image. Rise, let us leave this place, for you are in me and I am in you; together we form only one person and we cannot be separated." "The enemy led you out of earthly paradise….I will enthrone you in heaven."
And the power of hell, death itself was utterly broken as Christ led those souls out of the broken gates of hell and into eternal paradise. 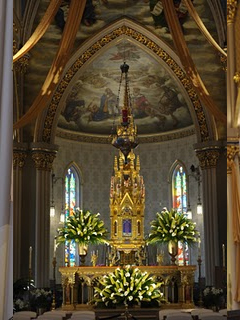 That long litany of saints who were taken into glory while our Lord was in the tomb should make even more powerful the event we celebrate tonight. The gates of hell probably quaked again in fear as all of those blessed souls went forth to God. But so too should the very fibers of our lives and our bodies tremble just a bit this night. Because in his death, offered freely for all, Christ went back and saved the first man and woman from death. But now he comes here; to you and to me, to your heart beating flesh and mine. He came back to earth, he took up our flesh again, and forever released it from death. And he did it only so that he might rescue you and me from the power of death. He did it so that just as he joined Adam to himself for all of eternity, he might do the same for all of us. And in the baptisms we will witness this night, we see this saving action made visible. You and I are gathered at the tomb, and Christ is here to pluck up our courage: "Do not be afraid." The hour of our salvation has finally dawned.
You and I have been sleeping, yes we have been spiritually sleeping. But Christ has risen from death, and only so that we will rise from death itself to be with him. The slumber of our old ways can be tough, and the slumber of death itself is long. Christ breaks through all these this night. At long last, my friends, let us walk in the light of our Risen Lord!