Homily of the Superior General at Perpetual Profession

Homily of the Superior General at Perpetual Profession

As we come together in this beautiful Basilica for the Final Profession of six of our seminarians of the United States Province of Priests and Brothers, our hearts are filled with gratitude and joy.
We are grateful to God for the grace of a religious vocation which he planted in the hearts of these men and which led them to spend a number of years in guided and personal discernment.

We are grateful to their families who are celebrating with us today and who provided them with the gift of faith and supported them in many different ways. We are grateful to our founder, Blessed Basile Moreau, who brought together the Brothers of Saint Joseph and the Auxiliary Priests of Le Man into the Congregation of Holy Cross, and then, with the addition of the Holy Cross Sisters in 1843, offered us a unique vision of religious priests and brothers under the same rule, and sisters in a separate building under a different rule, yet working together in imitation of the Holy Family. 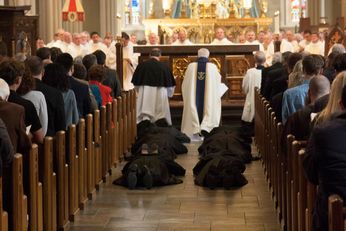 One of the special privileges and responsibilities which I and the members of the General Council have is to read and discuss the petitions for final profession from young men around the world, before admitting temporarily professed religious to final profession. These petitions are beautiful testimonies to the love for the Lord, the Church and the Congregation of faith- filled young men. I would like to intersperse (anonymously of course), some of the reflections of these six religious on this special day.
We are filled with joy as this province and our Congregation is blessed by the presence among us through a life-long commitment of six outstanding religious. They will make wonderful contributions to our common life and ministry.
At the root of religious profession is the sacrament of our baptism, when we were claimed by Jesus Christ. The sign of the Cross that was marked on our foreheads is now joined to the Cross of Jesus as our only hope, described by one of those who will profess vows soon as "consecrating my will in a community which takes its stand, as a matter of Charism, at the intersection of the mysteries of suffering and hope."
And by another "committing myself to a Community whose only hope is the Cross, means that all suffering has already been redeemed by the Cross of Jesus and brings us closer to him."
As Holy Cross religious, we want to live out our baptismal commitment in a public way that gives witness to what we believe and profess. In this way, we hope to profess our love for Jesus Christ and his holy people. We understand both the essence and the challenge of this aspect of our lives. Our Constitutions remind us that ''If we drink the cup which each of us is poured and given, we servants will fare no better than our master. But if we shirk the Cross, gone too will be our hope." 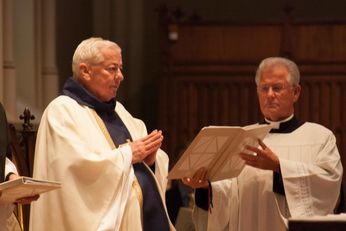 As our founder wrote: "The pagans called the first followers of Jesus 'Christians' because they saw that the disciples followed what Christ said and did. When we become Christians, we become children of God by grace, as Jesus Christ, the Son of God, is himself by nature." In the reading from the first Book of Samuel, we hear that prophetic oracles were rare in those days. The young boy Samuel was sleeping near Eli. Three times Samuel heard a voice calling him. But it was only when Eli assisted him in discerning the voice as God, did he respond with the words "speak Lord, your servant is listening", that he learned of God's Will for him.
The men who will make their final profession today have learned through patience, guidance and prayer to open themselves to discerning God's will for them in their service to the Church and the Congregation.
As our brothers spent significant time in discerning God's will for them, their personal relationship with Jesus deepened, and the many apostolic experiences that were theirs over the course of formation, enkindled in them a desire to lead others to Christ. Their faithfulness to common and private prayer, especially the Eucharist and the Liturgy of the Hours, deepened their love for the Word of God.
Paul's Letter to the Romans urges us to understand our calling as Christians as an opportunity to offer ourselves to God as a living sacrifice which is holy and pleasing to our Creator. It urges us to examine and determine the culture where we live rather than simply conform ourselves to it. Renewed in mind and heart, we can more easily discern God's will and pursue holiness as God's gift to us.
In Holy Cross, we can appreciate the many gifts and talents that are present among us. We can learn how to grow in our own spirituality from role models, from friends and from priests and brothers who exemplify in their lives men who have been transformed by God's Spirit. 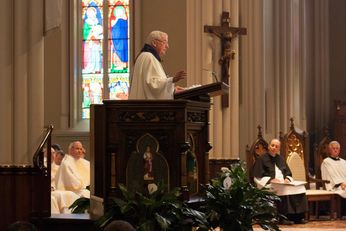 "I love our community," one of our seminarians wrote. "It is what drew me to Holy Cross in the first place and is what has sustained and nourished me. The examples of the men in this life and the joy and zeal they have in living their call has always caused me to strive to be worthy of being amongst their ranks.''
Holy Cross has innovative and creative men in social and parish ministries, in Catholic education, in scholarship and in direct service to the poor. Others carry out their assignments with faithfulness and some in unheralded ways. Yet all of them serve the Church and the Congregation well.
The recent Popes have urged us not to be afraid of loving the Church and living out our call. Pope John XXIII placed the Church on a new pathway of reform; Pope Francis calls us to trust in God's mercy and in His personal and intense love for each of us. His wonderful example of a man of prayer inspires us, as does his courage in bringing about changes that will serve the Church well. He is a man of charismatic love and confidence in God's mercy and forgiveness.
After mentioning the many different gifts which are present in every Christian community, Paul writes that we should let love guide our lives, be filled with zeal and serve the Lord "rejoicing in hope, enduring affliction and persevering in prayer."
Constitution 2 states that "There can be no Christian community which does not gather in worship and prayer ... The Lord's supper is the Church's foremost gathering for prayer. It is our duty and need to break that bread, and share that cup every day unless prevented by serious cause. We are fortified by for the journey on which he has sent us. We find ourselves especially close as a brotherhood when we share this greatest of all table fellowships."
This exhortation of the Constitution places celebration of the Eucharist at the heart of our lives as apostolic religious. The centrality of the Eucharist is not only a reality in our religious houses but in our ministries as well. Seminarians are prepared well to preside and preach during their formation and leave formation confident in their ability to do so well.

While a number of the older Congregations have a distinct spirituality, the Eucharist is at the center of our spirituality as Holy Cross religious. We come together at Mass to mark happy and sad occasions not only for ourselves but for and with those we serve.
Loving relationships, friendship and obedience are the characteristics of the disciple. By living in a relationship of love and obedience to Jesus, we obey his commandments as he obeys His Father's, and Jesus shares his love with us.
As we deepen our relationship in love to Jesus, he passes on to us what he has learned from the Father, and we pass from servants to friends. Jesus has chosen us. Jesus gives up his life for us, and through his life-giving death, we pass from life through death to eternal life.
A number of you wrote that you cannot imagine your life without Holy Cross. We are grateful that you said yes to the way of life you discerned with discipline and grace. We cannot imagine our lives as Holy Cross religious without you. We are happy to share life with you forever.

Rev. Richard Warner, C.S.C., is the twelth Superior General of the Congregation of Holy Cross, and works at the Generalate located in Rome. Fr. Warner has served in many diverse ministries during his service to Holy Cross, including studying and teaching in Chile, serving as Provincial of the former Indiana Province, and as the Director of Campus Ministry at the University of Notre Dame. Fr. Warner is originally from Cleveland, Ohio, and was ordained to the priesthood in 1966. He was elected Superior General in 2004.