The first reflection in September’s Magnificat was about an actor, Sir Alec Guinness, who was a convert to Catholicism after playing a priest in a movie in the 1950s. After filming one day, he was walking down the street still clad as a priest when “a local child mistook him for a real priest, trustingly took Guinness’ hand, and began accompanying him down the street.” In Guinness’ remarks about this event, he said, “I reflected that a Church which could inspire such confidence in a child, making its priests, even when unknown, so easily approachable, could not be as scheming or as creepy as so often made out.”

Given that I was reading this reflection after a summer of McCarrick stories and the Pennsylvania grand jury report, this line was like a punch to my gut. This reflection, I thought, perfectly captured both what the priesthood can – and should – offer and how far it felt we had fallen from that ideal in our Church today. This image, this challenge, this gut punch became a staple of my prayer.

Since last year, we have gone to the Grotto to greet people on game day Saturdays to hand out prayer cards, pray with people, and hear their stories about their faith or family or football. It has been a joyful experience, and the time usually flies. It is beautiful to witness all of the different kinds of people who come to Mary at the Grotto seeking hope. The stories we hear of answered prayers or desperate intentions are moving, and I am always humbled by people’s openness. 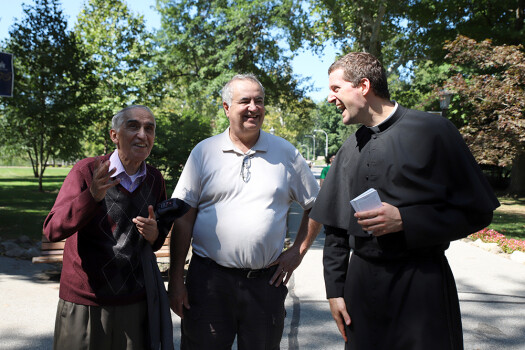 At the Grotto on September 15, two weeks after reading that reflection in Magnificat, a small girl walked up to me and very shyly said hi. Her father clearly put her up to this, but he stayed a few steps behind her. I knelt down, asked her name, barely heard her response, and tried to ask another question, but her shyness won out. She turned to walk away with her dad, and I called out a final goodbye. She turned, and from about fifteen feet away sprinted at me with open arms. With little choice, I knelt back down to receive and return her hug.

As she walked away, I couldn’t help but think of Alec Guinness and how good our God is to give a sign of hope to those not even aware they were searching for one.

Mr. Drew Clary, C.S.C., is in his second year of temporary vows with the Congregation of Holy Cross. As an undergrad, Drew studied politics and economics, and he is now studying to complete his M.Div at Notre Dame. Drew recently traveled to Puebla, Mexico, to complete a Spanish language course at Unversidad Popular Autónoma Del Estado de Puebla. He is originally from Castroville, Texas, and enjoys reading, swimming, running, conversing and spending time with friends.