Inspired by Brother Andre to be a Saint

Inspired by Brother Andre to be a Saint

Over fall break, the Office of Vocations, together with Campus Ministry at Holy Cross College and the University of Notre Dame, organized a pilgrimage for students to St. Joseph's Oratory to celebrate the first anniversary of Saint André Bessette's canonization. Michael Mercurio, a junior at Notre Dame, was one of the students who attended the pilgrimage, and he filed the following post for our blog.

The two most profound moments for me on the pilgrimage to St. Joseph's Oratory in Montreal were actually nothing uncommon.

The first one happened during the Sunday Mass at the Newman Center Mass at the University of Toronto: Once I had received Communion, while I was watching the congregation line up after me, my mind took a snapshot of an elderly man offering the Blood of Christ to a mother with her child. 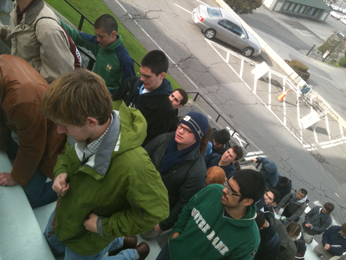 The second profound moment was at the Oratory: As our group prayed the rosary on the front steps (with more than a few groans from me), I noticed a tiny old Filipino lady struggling up each step as she prayed behind us. Yet she never uttered a sound of a complaint.

These two images are really nothing out of the ordinary, but they left such a lasting impression on me. The reason, I think, is that both exemplified so much of what Saint André Bessette stood for. Brother André is often called Pauper, Servus et Humilis – a poor man, a serving man, and a humble (or lowly) man. Brother André teaches us that you don't have to be perfect or extraordinary to be a saint. "You just need to be you." You just need humbly to accept your weaknesses and lowliness and to dedicate what you do have towards serving God and others. 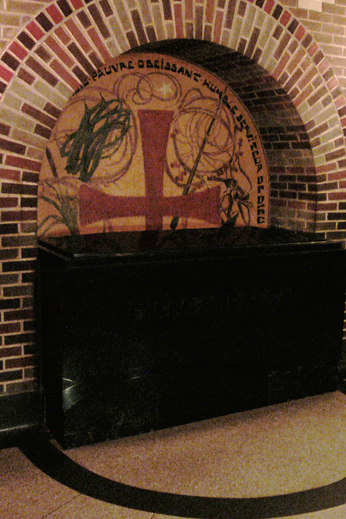 Brother André was not extraordinary in worldly matters: He had little education; his parents died when he was very young; and his body was infirm. But he was extraordinary in responding to God's call to holiness. Not allowing his weaknesses to hold him down, Brother André committed himself to the Congregation of the Holy Cross and to Saint Joseph and, even in his everyday activities of attending a door, exuded incredible love to everyone he encountered.

In my own short encounter with Brother André during this pilgrimage, I believe that this was his legacy: his humble acceptance of who he was and his dedication of himself to God and others. I think that's why I was so struck by the old man giving the Blood of Christ to the mother with her child and by the old Filipino woman praying on the Oratory's steps: There was no pretension – no "I'm better than you." There was just whole-hearted, humble dedication to sharing in God's call to holiness. 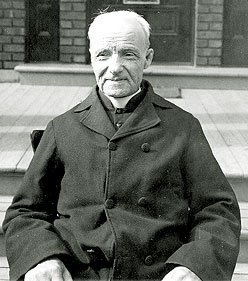 Whenever I see images of Brother André, I see a happy old man whom I would have loved to meet. The wrinkles around his eyes show that he always smiled, and the sparkle in his eyes show love of life. Moreover, he seems so unassuming. He indeed looks very small, but he looks ever-welcoming and inviting.

Learn more about Saint André Bessette on the Spes Unica blog and the Holy Cross Office of Vocations website.