Into Africa: A Most Unlikely Holy Cross Vocation

Into Africa: A Most Unlikely Holy Cross Vocation 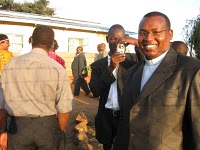 Fr. Pat Neary, C.S.C, continues his posting for us from his missionary work in our seminary in East Africa. Today he shares the moving vocation story of one of our recently ordained priests there.

Since arriving in East Africa in June, I had the privilege of meeting an exceptional young Holy Cross religious, Fr. Chris Letikirich, C.S.C. He was ordained a priest with two other Holy Cross deacons on September 19. I attended his Mass of Thanksgiving a few weeks later in Maralal, Kenya, which is about 13 hours from Nairobi by car, most of it by heavily rutted dirt roads.

His background and story caught me by surprise. He is of the Samburu people and experienced missionaries in Kenya will tell you that there are very few Catholic priests or religious from the Sanburu tribe. So how did he end up in Holy Cross?

The credit actually goes to a Consolata missionary by the name of Fr. Bob Rezac, I.M.C. Fr. Bob recounted that when Chris was a boy, he would often accompany the Consolata missionaries on their day trips to parish outstations. Fr. Bob joked that it was probably because he wanted to ride in their Land Rover. One day, Chris, who had no formal religion, said to him, "Teach me about God." 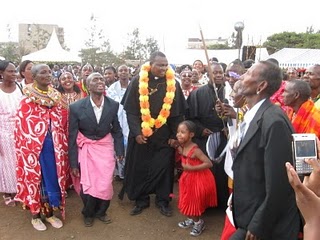 One bright but cold morning some years ago, Fr. Bob decided to go meet Chris' family. As he looked in through the front window of their modest dwelling, he saw four little children huddled close in one bed, shivering under a thin blanket, Chris among them. Immediately he set out to town to buy blankets for the children. And from that time on, he grew close to the family.

Eventually Chris became a Catholic, and given his enthusiasm for his new-found faith, he convinced his parents and siblings to become Catholics as well. Soon enough, he felt a call to priesthood. Fr. Bob wisely encouraged him to be patient and to experience life outside his village for a time. Once older, Chris wrote to ten missionary communities, among them Holy Cross, an unknown entity to him at the time. It was the quick and enthusiastic response of Bro. Allan Harrod, C.S.C., then Director of Vocations for East Africa, that sold him on joining Holy Cross.

The Mass of Thanksgiving in his home parish was unforgettable, with Samburu women in traditional dress, singing traditional songs and dancing in the style typical of the region. Chris' father, a very shy man, surprised everyone by dancing at the party held afterwards. A most moving moment for me came when Fr. Chris gave Fr. Bob his first blessing after Communion, the man he refers to as his spiritual father. 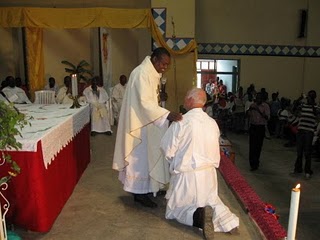 I later told Fr. Bob that of all the great things he had surely done in his years as a priest, inspiring Chris to become a priest had to be among the greatest. He smiled with tears in his eyes nodded his head in agreement. I thanked him on behalf of Holy Cross. Now it will be Fr. Chris' turn to inspire others. I would like to think that among a couple of the young Samburu men who witnessed that Mass, the seed of a vocation was planted. If so, I would happily make the 13-hour trip again in a few years.