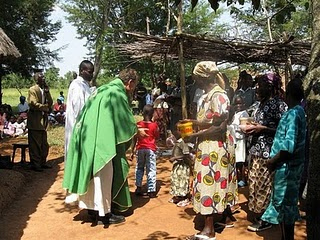 Fr. Pat Neary, C.S.C., continues to share with us in his monthly series his adventures as a newly minted missionary in Africa. Today, this Indiana native relates to us the lesson he received when applying for his driver's license.

I was told by a friend when I arrived in Nairobi in June that I should obtain a Kenyan driver's license. He recommended some driving lessons with "Glory Driving School" so that I could master the infamous Nairobi roundabouts. After my driving lessons, I spent two hours at the driving school running little toy cars through the model roundabouts.


To get your driving license, you have to drive for the Kenya police. People here fear the police as they tend to be trigger happy and are considered the most corrupt institution in the country.
The day of my driving test, I arrived at the test center at 7:30 a.m., though they opened at 8:00 a.m. I had blocked out two hours in my mind, but was fairly certain I would finish sooner than that. Imagine my surprise when about 120 people arrived for their driving test! Imagine my shock when the presiding officer-instructor promised us that we sould be done by 3:00 p.m.
We had to form lines to register, lines to take the oral test, and lines to drive. It slowly dawned on me that I wasn't going anywhere fast. I remembered the wise words of a Holy Cross religious when describing life in Nairobi: "You will often want to laugh and scream at the same time." As I accepted my fate, I fought my frustrated 'inner American' and asked God to help me make the most of the situation. 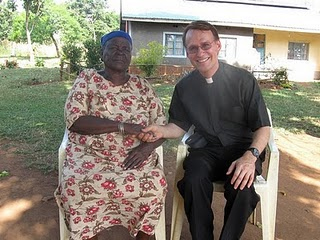 I began to reach out in conversation to the people there with me. The crowd was mostly of young people, though about 15 of us were 40 and above. We were treated more gently because of our elder status and were tested orally two at a time. I was asked when a driver should turn on the car lights during the day. I responded, "In a tunnel." The officer replied, "Sir, how many tunnels have you seen in Nairobi?" He then asked the woman with me to assist me in remembering the correct response. Somehow I passed.
After my oral test, a young woman invited me to tea in the police canteen and shared that it took her two years to get the money together for her drivers' license. I chatted with a police officer and saw the ramshackle barracks where he and other officers live with their families. After tea, conversations just happened and the time flew by. I probably talked to close to 40 people by the end of the day.
When I finally had my turn to drive for the officer, I drove for about 250 yards. He was nice to me. I was very aware that Americans get special consideration from many, the police included.
At 5:00 p.m., I emerged with a form that would allow me to obtain a temporary license. I found out later from a policeman that I didn't need to be there. My International Driver's License is valid in Kenya (whereas I was told the Kenyan police didn't honor them). 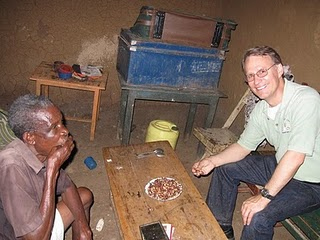 I'm glad I went, however. Could Father Moreau's admonition to trust in Divine Providence mean that there was even some hidden purpose in my being misled about my need for a Kenyan driver's license? I would like to think so. I think that I'll have a little party when my license finally arrives. It will be a badge of honor, and I'll think of all the people I met that day who are either fellow drivers or the police officers easing traffic through the roundabouts of Nairobi.