Into Africa: "X" Marks the Spot

Into Africa: "X" Marks the Spot 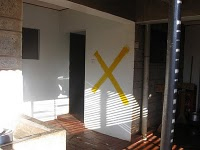 Fr. Pat Neary, C.S.C., sent his latest post about his missionary adventures in East Africa. Today's is a real adventure as he shares about the trials - and the graces - of the government's forced demolition of our seminary in Kenya. Please keep him and our seminary community in your prayers.

One fateful Friday afternoon in early October I was sitting outside at Hekima Language School, sipping tea and trying to practice my rudimentary Swahili, when I received a panicked phone call from one of the men in formation: "Fr. Patrick, come home quickly if you are able. The Ministry of Roads has just marked our house for demolition." 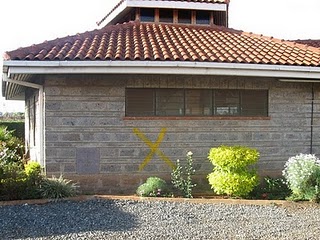 I had little comprehension as to what had just transpired. As soon as I arrived at our gate, I saw yellow "X"s on our compound wall. As I entered the compound, I saw yellow marks everywhere, even on our chapel wall. The whole neighborhood had been similarly marked.

The shock for all of us was palpable. Surely there had been some mistake. A government just can't show up and condemn your home. Surely there has to be some kind of notice or hearing first. There has to be compensation. We scrambled to find land titles and deeds and quickly called our lawyer. When we finally met her, she said, "Gentlemen, prepare to lose your property."
On Monday, we met with some officials from the Ministry of Roads. We learned that our land was part of a "double-allocation." In other words, we were illegally sold land destined to be part of a connector road to the new superhighway called the Southern Bypass. There was no stopping this. People with money and power had lost bigger homes and businesses than our humble formation house.
I asked the Ministry of Roads in a letter to allow us until November 30 to vacate our home. On October 13, I received their response: we were to vacate and demolish our building by October 30, or they would do it for us! 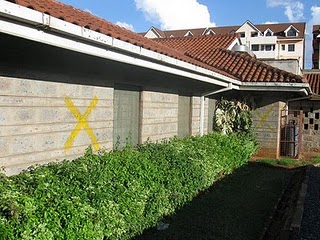 In answer to our prayers, the Consolata priests and brothers—a missionary order from Italy—offered to rent us part of their seminary compound until we can find land and raise the funds for a new house of formation. They received us with such warmth and understanding that we were overwhelmed. 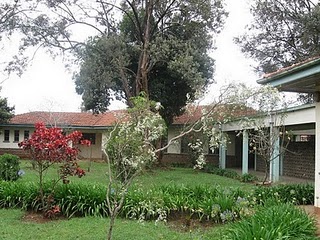 It is hard to describe the feelings that I went through that day. I struggled to contain my emotions as I delivered the bad news to the men that night. When I finally made it clear that we had to leave, there was stunned silence in the room.
I won't go into much detail concerning our fevered search for a new place to house 24 men. I can share that we were overwhelmed by the expressions of sympathy, friendship, and prayers offered for us by countless religious from other communities, fellow Holy Cross religious, and other friends. 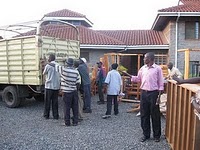 We had a final prayer service our last night at McCauley House, presided over by Fr. James Burasa, the District Superior of East Africa. Two men acted out "The Flight to Egypt." We entrusted ourselves to St. André, Blessed Moreau, and Servant of God Bishop McCauley. We offered flowers from our property to our patroness, Our Lady of Sorrows, for whom our chapel was named.We managed to move an entire house of formation in one day, and a school day at that. I was so proud of our men. Slowly we are making this new place our home.

I am not a psychologist, but I know enough to realize that losing one's home is a significant trauma for any human being. I will invite some wise elder to come and help us make sense of it early next semester. Now we are too busy with studies. 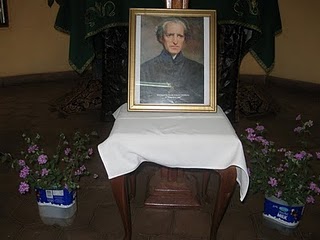 In Holy Cross, we speak often of Fr. Moreau's trust in Divine Providence. He once witnessed the selling off of the mother church and even the possessions in his own bedroom. We do trust that this painful episode has some purpose in God's grand design.

I told the guys that some day when they are old men, they will relish telling people the unbelievable story of what happened to them in October of 2010. I hope they will offer the lessons learned about Divine Providence, the power of prayer, and the grace that abounds wherever sin and injustice is present in our world. 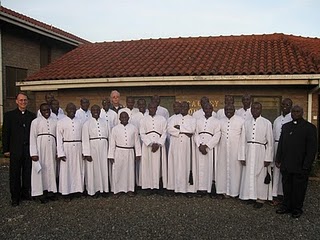