iSeminary: Retreating into the New Semester

iSeminary: Retreating into the New Semester 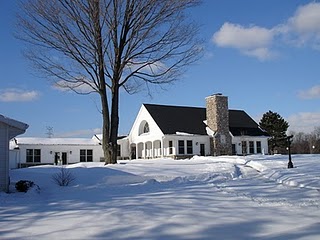 Ryan Pietrocarlo, one of our Moreau candidates, has submitted this month's post from Moreau Seminary. He and the rest of the seminarians arrived back from their Christmas breaks last week, as Ryan shares, to start the new semester off with a retreat at the Holy Cross Center in La Porte.

The Moreau seminarians returned from the winter break early for a weekend retreat in LaPorte, IN. The conferences were given by Frs. Larry Gillick, SJ, and Greg Carlson, SJ, from Creighton University.

They presented on a variety of topics for the seminarians, including finding oneself in prayer, examining the call to ministry, discerning the meaning of being a servant for others, and reflecting on the mission of service. I believe I can speak for the other seminarians when I write that we found the talks to be very insightful and enriching. In particular, we were struck by some of the new ways to look at ministry. The presentations also helped articulate how prayer leads to effective ministry.

The weekend was also an opportunity for us to have some time for relaxation and catching up after the long break. We had fun sledding (on the several feet of snow that covered the property), playing board games and cards (sometimes late into the night), and just spending some time together in fellowship. It was a great chance to ease back into things and simply be together without the busyness and stress that exist during the semester. All in all, we appreciated the weekend as a chance to rejuvenate in mind, body, and spirit before hitting the ground running at the start of the semester.