It Has Been a Joyful Year

It Has Been a Joyful Year 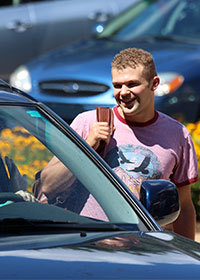 It was almost exactly a year ago that I arranged my first visit to Moreau Seminary with Fr. Jim Gallagher who was then the vocations director for the Congregation of Holy Cross. I made my first visit to Moreau on March 18th and applied shortly thereafter. I received my acceptance phone call sometime early in May. The whole process moved quickly for me and, at the time, I wondered and discussed with friends whether or not I was moving too quickly. To that point, I saw the decision to enter the postulant program as simply a decision to enter into formation for a year - making it one amongst many smaller vocational decisions. Furthermore, the application process itself is a helpful discernment tool and there are numerous points throughout that process at which the decision is either reaffirmed or put on hold. In my case, the substantial process helped to reaffirm my desire to apply to Holy Cross. This desire to apply was aided by a great gift of grace: Christ knows us better than we know ourselves and, if we are willing to trust Him, He will reveal us to ourselves. In my case, I had to let go of my own stubborn ambitions for my own life in order to see that God knew me better than I knew myself. In doing so, He spoke through my desire for self-gift in marriage and through my desire to teach.

As I indicated above, my journey to religious life was unexpected. The first time that I thought about religious life was in my junior year of college. I was working through some spiritual exercises and imagining myself in married life and religious life. In both situations, I could see a great deal of joy. This was surprising in that I had been dead set on marriage for much of my life. It was the default position in my mind and I almost treated it as if it were something to be "accomplished," so to speak, which is absolutely an unhealthy way to approach marriage.

I had always been drawn to the ideal of self-gift that is entailed in marriage so I set out to serve God in the way that I envisioned. Instead of truly opening myself up to the Lord's voice, my attitude was something like this: "Alright, God. Here's how I'm going to serve you: I'm going to get married, have a huge family (if you will it, of course) and do good work." Fittingly, God spoke through my attachment to marital self-gift and, in this way, my eyes were opened to another means of living out that selflessness.

Last January, over a period of three weeks, it was made clear that I was being invited to discern religious life; and, in doing so, to live out my desire for marriage as a witness to the kingdom to come. As a result, I started reading George Weigel's "Witness to Hope" about John Paul II and, in him, I saw a model of the priestly vocation that greatly appealed to me. In John Paul II, I saw an undaunted and relentless witness to God's kingdom and Christ's love: "Although I have lived through much darkness, I have seen enough evidence to be unshakably convinced that no difficulty, no fear is so great that it can completely suffocate the hope that springs eternal in the hearts of the young... Do not let that hope die! Stake your lives on it!" In his life, too, I saw the intellectual life lived to its fullest in that his academic work was so closely integrated with his sacramental ministry, his pastoral work and his teaching. 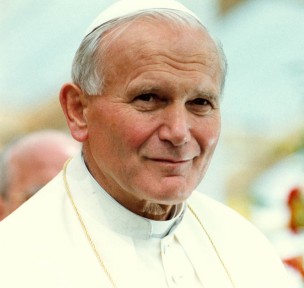 I learned that my desire for self-gift could be expressed in priestly ministry - in offering the sacrifice of the mass, in the confessional, and in teaching - in a way that I had never seen before. This call particularly struck me when I realized the natural relationship between teaching and priestly ministry: there are few things that I enjoy more than teaching, facilitating discussion and learning; teaching and the academic life are very much integral to who I am, so when the Lord extended the invitation to discern religious life with an emphasis on being an educator it made it a lot easier to give it a try.

Teaching, then, was one of the primary attractions to the Congregation of Holy Cross, but not the only one. During my visit to Moreau Seminary, I read through a significant portion of Basil Moreau's Essential Writings, where many of his sermons and even his own expanded version of the Ignatian Exercises are contained, and learned much about him and the charism that he wished for the Congregation. We are educators in the faith and our strength and zeal for teaching is renewed by our communal prayer and life together. This rich sense of community is found in our common prayer and common table. Ultimately, I was drawn in by the community and the mission - Moreau's call to remain hidden in the wounds of Christ: "Hide yourself in God with me... Bury yourself willingly in the dust of a classroom or in the obscurity of a rural parish church."

I've been at Moreau now for close to a year. I'm grateful to thecommunity for allowing me to discern with them and thankful for the gift of this year. It has been a wonderful, joyful year and I'm looking forward to the opportunity to discern further at our novitiate.

Mr. Gabriel Griggs entered Moreau Seminary as a Postulant in the fall of 2015. He completedhis undergraduate studies in liberal studies and applied mathematics at theUniversity of Notre Dame in 2014. He is originally from South Bend, Indiana.