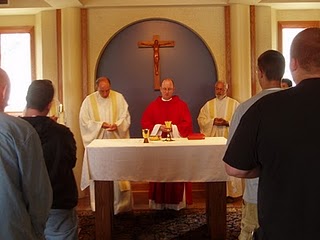 Fr. Peter Walsh, C.S.C, checks in from Gryphon's Pub with his installment for his column this month on his work as a campus minister at Yale. Who knew that a few spirits together with the Spirit would help deepen our understanding of the new translation of the Mass?

One of the more popular programs I oversee as part of my ministry to graduate students is Theology on Tap. It began in the Archdiocese of Chicago over 25 years ago and is a very successful outreach to young adults. In local chapters throughout the country, the ministry brings young Catholics together in a relaxed social setting -- usually a local pub or restaurant -- for conversations about Church teaching and the intersection of faith and daily life. Our local chapter of Theology on Tap at Yale started five years ago by a student interning at Saint Thomas More Chapel, and it meets monthly in Gryphon's Pub, part of the Graduate and Professional Student Center at Yale.

In the past few years, Theology on Tap has brought a local bishop, faculty from Yale, visiting scholars and a speaker from the USCCB on topics like Catholic prayer, faithful citizenship, end of life issues, and human rights work. I'm always amazed at how folks who haven't found their way to our chapel have no trouble making their way to the pub for a Brooklyn lager and a talk on theology.

This week, the featured speaker was...ME! The graduate students who organize the evenings thought that we should kick off the year with a discussion on the new translation of the Mass that we will begin using on the First Sunday of Advent. They had heard and read about it on blogs and in the mainstream media and found most of what they heard confusing and laden with controversy. They wanted to know why the Church was changing the Mass and what our plans were for implementing the changes. What better venue to discuss what many portray as esoteric translation issues than the dark wood and exposed brick of Gryphon's Pub on two-for-one night! I was sold on the idea when one grad student came up with the title "And With Your Spirits."

In spite of the two feet of fresh fallen snow that clogged campus earlier in the day, around twenty young adults showed up. I was fresh from a workshop on the topic and came with handouts that compared the Latin text of some of the people's prayers with the current translation and the new one. Grad students are fairly comfortable analyzing texts and we went to work. We bogged down a bit on one of the choices--the change in the creed from "one in being" to "consubstantial"--until a student specializing in Dante gave an amazingly brief but comprehensive overview of metaphysics and argued for the importance of precise terminology. We then had some fun imagining the ingredients of a new drink--a Consubstantial. How about a splash of Triple Sec for the Trinity?

By the end of the evening, many stated that though they were initially skeptical about the changes that will take place in the only Mass they have ever known, they now had a better understanding of the reasons for the new translation and better equipped for the transition.