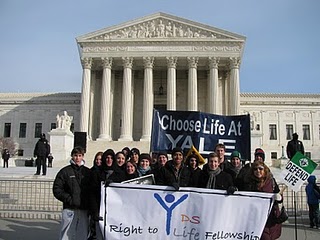 It seems like a lot of our blog readers were at the Right to Life March in DC this past month. So was Fr. Peter Walsh, C.S.C., with some students from Yale has he relates to us in this month's installment of "Ivy League Catholic."

For a number of years now, Yale students have participated in the March for Life through an organization named Choose Life at Yale (CLAY). Though CLAY was founded by a Catholic student from Saint Thomas More Chapel and includes a number of students, it is not formally affiliated with our chapel or with any religious community. This allows for students from all backgrounds to participate in a Pro-Life witness on campus. When interacting with other students or when writing in the Yale Daily News, members of CLAY always use rational arguments from protecting human life rather than explicitly religious positions. In the past, I have attended their annual silent vigil for life and they have worked with us on raising awareness on other life issues like the death penalty.
This fall we decided to boost our support for CLAY and Yale's visibility at the march by helping to organize other students on a trip to Washington DC. A new graduate student at Yale Divinity School--a recent alumnus of the University of Notre Dame--formed a right to life fellowship at the Divinity School, and they joined me on the trip. We met up with CLAY the morning of the march and traveled together to the National Mall. Once there, I was able to spot the Notre Dame banner and chat for a bit with Frs. Terry Ehrman, CSC and Stephen Lacroix, CSC. While I was gone, our group became fascinated by the banner of the "Yoopers for Life" (referring to the "Upper Peninsula in Michigan) and wandered away, so I had to scramble to find them amid the huge crowd.
Even though our number of students didn't come near the 400 from Notre Dame, Yale students attracted quite a bit of attention. Once the two banners for CLAY and the Right to Life Fellowship were unfurled on the Mall, folks came by offering expressions of surprise and best wishes. I've never quite gotten a full grasp of the popular reputation of Yale, but let's just say that people don't expect Yale students to be Pro-Life or religious! We were not alone among the Ivy League at the march. We ran into students from Dartmouth, Princeton and Cornell during the day, and I suspect there were others. 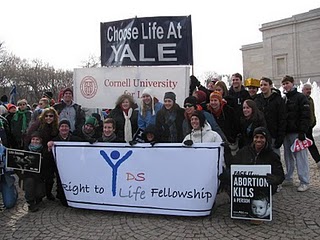 Not that the world needed another example of the innate leadership skills of Yale students, but when the march stalled on the Mall by over an hour and a half, the Yalies decided to march on their own. Much to our surprise other groups followed and we became the kickoff group for the entire march until the designated frontline marchers, and banner managed to outrun us. We had some prayer time in front of the Supreme Court Building before heading back to the metro for the trip home. 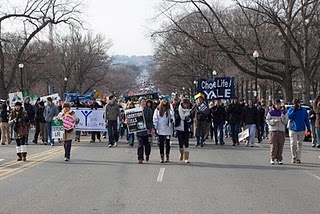 Our students can feel a bit out of step at times with the culture on campus. Yale is such a diverse place, I wonder if any student feels entirely in sync with campus culture. The March for Life is very much a youth movement, and our students gain a great sense of support and solidarity by attending with thousands of young adults from across the country.