Jubilee Homily: Side-by-side with all people

Jubilee Homily: Side-by-side with all people 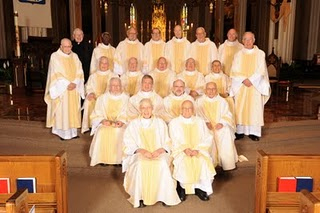 It took us a little while to make good on our promise, but today we are proud to post for you the text from Fr. Frank Murphy, C.S.C.'s homily at Holy Cross' annual Mass of Thanksgiving for its Jubilarians. It was well worth the wait to get this Spes Unica exclusive as it is a masterful homily underscoring what it means to be a Holy Cross priest or brother serving God's people. Join us one more time in giving thanks for our Holy Cross Jubiliarians and their 1,110 faithful years of service!

It is a great honor and privilege to have been asked to give this homily today. I stand before my peers and elders, an amazing group of men who have given their life to serving the Lord: 65, 60, 50 and 25 years. Wow! As one of the 25 year class, I feel like the youngster. Who am I to speak before all this wisdom? However, at 25 years of priesthood, it is no longer often that I am considered part of the younger generation. So, I'll take the honor of being among the youngest today.
Celebrating an anniversary like this draws one to reflect on the meaning of these years: What has characterized our priesthood and brotherhood in Holy Cross? For me, I first learned about what characterized Holy Cross from my father, when I was young. He was a double Domer and had great respect for the Holy Cross men he encountered at Notre Dame. He used to talk about many of them.
For example, I remember hearing about Joe Barry from a young age. My Dad used to say, "He hit the beach with the guys at Anzio!" My Dad was one of the vets coming back from the war. They were older and had seen a lot of life. It was important for them to have a priest who had been in the war with them; who understood them and what they had lived through; a priest who was in the world with them, not other worldly.

I think this characterizes the priesthood and brotherhood in Holy Cross: We are priests and brothers who are in the world, with the people, sharing their life, their struggles – searching for God together. Jesus in today's gospel (John 17: 6, 14-21) says that He has sent His disciples into the world, just as He was sent into the world by the Father. They are not of the world because they belong to Jesus and not to the evil one. But they are to be in the world, as Jesus was in the world, living with the people, sharing their struggles, helping to make God's love known in the joys and sorrows of life. As our constitutions say, we are to be "men with hope to bring." And so, as Jesus' mission was coming to an end, He consecrates His disciples to continue His mission in the world.
As Holy Cross priests and brothers, we were formed to be disciples who are in the world. I think you can see this in the ways in which we do our ministry.
Holy Cross priests and brothers live in the dormitories at our universities, with the people. It is part of what characterizes our presence at our universities. And you will hear guys at times talk about that knock on the door at 2 in the morning. It is a student whose parent has died and he or she needs to talk about the pain inside. Or it is a student who is struggling in school or has a question about faith and how God fits into their life. The brothers and priests who live in the dorms talk about the meaning these encounters give to their vocation, even though they will need to get up and go to the classroom or the office the next day. It is why they are in the dorm. That encounter might have made a significant difference in the student's life. 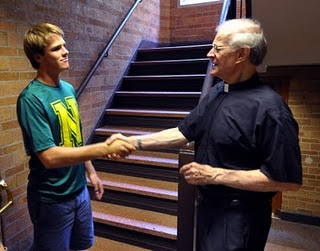 A board member at one of our universities recently shared at dinner about an encounter he had with a Holy Cross priest when he was a student. The priest was his teacher. He said that the encounter changed his life. One day the priest challenged him after class: "You're a good student, but you are not working up to your potential." That challenge woke him up, he said. The fact that father would take such an interest in him made him think about his life and goals. He did change his ways, and today is a top executive at a major corporation and serving on the board of a Holy Cross Institution for the Holy Cross president who was that teacher. That encounter might not have happened if we didn't see ourselves as in the classroom to help the student reach his or her God given potential.
In Nairobi, Kenya, as in many of our parishes around the world, we choose to live in the neighborhood with the people, sharing the same injustices and insecurities that they face. In this way, we are among the people and can better understand and serve them. It is also a rich source of material for homilies as we can relate the Gospel to the struggles and joys in their lives. 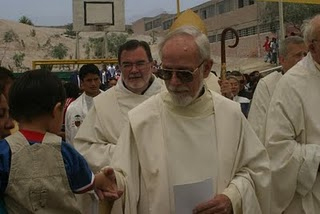 When I entered Holy Cross, we were in three of te toughest places in world at that time: Idi Amin's Uganda; Pinochet's Chile where after a coup many of our priests were made to leave or were tortured because they worked and lived among people; and Bangladesh, which had only a few years earlier suffered a civil war. I remember returning missionaries talking about running from the bullets of strafing airplanes. They were still there, in the midst of war, with the people.
The stories could go on and on. Any one of these men up here could relate stories about themselves or their brothers, stories that come from being in the world, with God's people. It is part of what it means to be a Holy Cross priest or brother. Our Constitutions teach us this. Each of you in your invitations had a prayer card with this quote:
"As disciples of Jesus we stand side by side with all people. Like them we are burdened by the same struggles and beset by the same weaknesses; like them we are made new by the same Lord's love; like them we hope for a world where justice and love prevail. Thus, wherever through its superiors the congregation sends us we go as educators in the faith to those whose lot we share, supporting men and women of grace and goodwill everywhere in our efforts to form communities of the coming kingdom."
This is what it means for Holy Cross Bothers and Priests to be in the world. That is what we have been consecrated for.
One of the things that characterizes Holy Cross in the world is that we know we can't do the work alone. We need collaborators, colleagues, fellow disciples in the world, like you. As Paul says in the letter to the Philippians (1:3-11), we are "partners" in grace for the Gospel. I believe I speak for my brothers here when I say that like Paul, we all give thanks to God for the many partnerships for the Gospel we have had throughout our years of ministry: in parishes, universities, retreat houses, missions, high schools, and so on. These partnerships have truly been vehicles of God's grace for us – both a source of support and solidarity in the ministry, but also a seminary of continuing formation. We have learned a lot about God's ways through your witness to the Gospel. You have also challenged us to be more faithful to the Gospel ourselves. 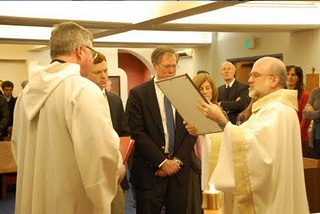 Last Fall, as local religious superior at the University of Portland, it was my job to inform the man chosen to receive the "Spirit of Holy Cross Award" that he had been chosen. When I told him, he was deeply moved and said that he had been praying daily to Blessed Moreau, our Founder, for many years. Praying daily to our Founder! Now it was my turn to be moved. I don't pray daily to Blessed Moreau; and I won't embarrass my brothers here by asking for a show of hands of how many of them pray daily to our Founder. You, our partners in the mission, preach the Word to us as well, broadening our knowledge of our mission and of God's presence and action in this world.
Again, each Jubilarian here today could name innumerable examples of how the Word of God has been revealed to them through their partnerships with so many of you, and by being with you in the world, among the people.
Many of you here today are family. Some members of our families have gone before us and will be there to welcome us into eternal life with Jesus. We remember them here and pray for them. Families are important to our call and our mission. For many of us our call began in our families and was nurtured there. To be a priest or brother in the world, one needs friends and family. You keep us rooted in reality. You also keep us humble.
My sister always wanted to make sure I stayed humble. When I came home from Africa on leave, she would be at the airport to greet me with all of her children. She taught the youngest to yell out as I came through the door at O'Hare: "HI UNCLE FRANK WITH NO HAIR ON TOP." That was a little much for a young child to remember, so when we got back to the house it got reduced to "Top." "Hi, Top," she would say and pat my head. (It is always dangerous to reveal family secrets like this to one's brothers: they never forget.)
We are grateful to you for the ways in which you have rooted us in love and relationship, and, yes, kept us humble. We assure you of our continuing prayers.
This is a day of gratitude, a Mass of Thanksgiving to God for our vocations, for the privilege to serve God in the world. It is a Mass of Thanksgiving for all of the many partnerships in the ministry we have had and for all of our families and friends who have support and loved us. God is working through us all to reveal his presence and action in the world. With St. Paul, let us be confident that God will bring to completion the work he has begun in each and every one of us.