Lessons from the Mundelein Tournament

Lessons from the Mundelein Tournament

My name is Tom Bodart. I'm a seminarian with the Congregation of Holy Cross, and I have a confession: I love basketball. No, no, I really love basketball. Sure, it's good exercise and a great study break, but it's so much more. Basketball is a language that speaks as much about a player's character as it does about his team's cohesiveness. Basketball transcends social barriers and forms an instant community among strangers. Basketball, especially when played fairly and with a positive attitude, is sacramental, a sign of God's love experienced through fraternal bonding. There's something really simple yet beautiful about this game, and I love it! 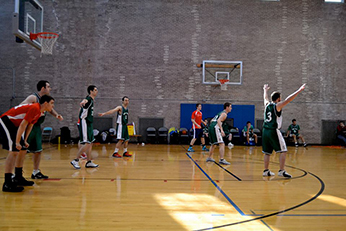 One of the perks of discerning God's call to the priesthood at Moreau Seminary, aside from the 24-hour access to a full-sized basketball court attached to the building, is that each January we compete in the Father O'Malley Invitational, an inter-seminary basketball tournament hosted by Mundelein Seminary in Chicago. (At Moreau, the tournament is simply referred to as "Mundelein".) Seminaries from across the region (even a couple from Missouri and Louisiana) come for a weekend of good competition and Catholic fellowship.
Despite this being my first Mundelein experience, I enthusiastically volunteered to run practice and take the lead as a player-coach. While several of my seminarian brothers tried to temper my exuberance, I couldn't help but dive headlong into coaching again. (I had coached at my Alliance for Catholic Education (ACE) school in Louisiana prior to joining Holy Cross.) In preparation for the first practice, I spent hours looking at film and mentally walking through drills. I wanted to put us in a position to win and knew (or thought I knew) we would have fun doing so. 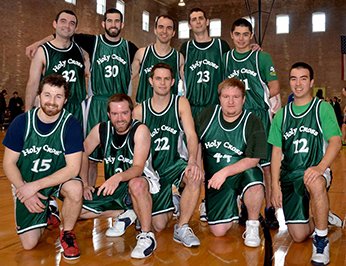 The first few practices were focused and instructive, but there was a problem: several of the guys weren't having fun. In my haste to improve our team's skills, I lost sight that the fundamental reason we attend Mundelein is to build community. I had heard many say this, but I hadn't really listened.
Thanks to the advice of several more experienced seminarians, we were able to change our practices to make them both enjoyable and technically profitable. At the tournament, we shocked everyone by knocking off the host, Mundelein Seminary. We then beat St. Joseph's Academy (Chicago) to earn a spot in the semifinals, but lost the next two, taking an overall fourth place. Not bad for a team that had won one game in the last three years! 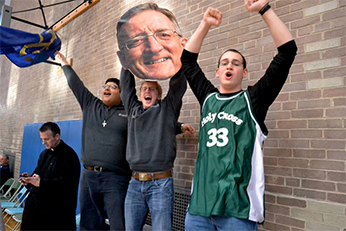 Although we didn't win the championship, we enjoyed our time together. We shared a few laughs over (and about) BLT pizza. (By the way, I would NOT recommend this as pregame food.) Before the games, we warmed up to live music and during the games the band played in the transitions between buckets, just like in the NBA! At dead balls, we laughed with our fans. (One made a huge head cutout of one of our beloved priests as well as a basketball helmet/hat. Nice work, Josh!) We prayed with the other teams and each day we celebrated the Eucharist. We played hard, and we grew in brotherhood.

Mr. Tom Bodart is a Postulant at Moreau Seminary, and is originally from Fredericktown, Ohio. Tom taught for the Alliance for Catholic Education (ACE) in Louisiana before entering formation.