Lessons of Mercy From Abroad

Lessons of Mercy From Abroad 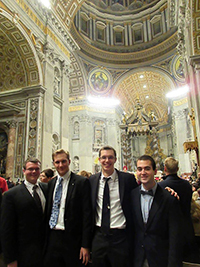 At the beginning of this year, many thoughts and emotions were going through my mind: much excitement for my third year of formation at Old College, the joy of welcoming four new men into the house, and perhaps most significantly, a bit of fear as my upcoming fall semester abroad in London approached. Those who know me wellmy family, friends, and brothers in Holy Crosswill agree that I certainly was not discrete in the expression of my nervousness for spending six months in a new country, and I must thank them for their support, prayers, and encouragement. When the day of our departure arrived, my nerves were almost overwhelming; I did not know what to think of this new adventure ahead of me. After a long plane ride, my classmate, Rob, and I arrived in Paris, and at that point, one of the most meaningful experiences of my life had begun. 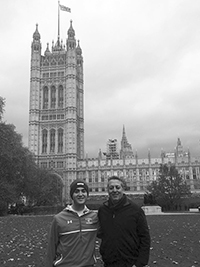 In Paris, Rob and I were greeted by Fr. John DeRiso, CSC, an American Holy Cross priest serving as Pastor and Rector at Notre Dame de Sainte Croix, our Mother Church and Shrine to Blessed Basil Moreau, CSC in Le Mans, France. Filled with excitement (and a bit of jet-lag), we spent the day in Paris before heading to the place in which the Congregation of Holy Cross was founded! I will never forget the powerful experience of kneeling in prayer at Fr. Moreau's tomb thinking about how much of an impact this humble and holy French priest has had on my life and so many others. As our week with Fr. John in Le Mans continued, we learned so much about the life of Fr. Moreau, and had the amazing opportunity to pray at so many beautiful places that were meaningful to him throughout his life. I was inspired by the great work that Fr. John is doing in Le Mans, and I am grateful for his excellent hospitality. It certainly was an awesome way to begin our semester abroad. 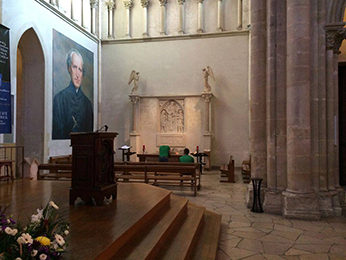 Following our week in Le Mans, Rob and I traveled to the place where we would be living for the next five months, Allen Hall Seminary in London! At the airport, we were greeted by Westminster Seminarian (now, Deacon-elect), Mikey Maguire, and from that moment on, we felt fully welcomed and embraced by the seminarians and formation staff at Allen Hall. It was, initially, a bit of a challenge for me to adjust to life in Allen Hall. As I worked through some struggles in making the adjustment to seminary life in London, I was, at first, hesitant to reach out to the other guys in the house. It was through these struggles, however, that I had a powerful experience of mercy. An aspect of mercy that might sometimes be forgotten is our willingness to accept mercyor help, in my casefrom others. I think this is a challenge that many of us encounter regularly; it is not easy to ask for and accept help from others, but in this Year of Mercy, it is important for us to recognize the ways in which God's mercy and love is present in our brothers and sisters around us. At Allen Hall, I experienced mercy through the relationships that I am blessed to have formed during my time there. Whether it be taking me to a different church each week for Sunday Mass, listening to One Direction (yes, One Direction!) or the Notre Dame Folk Choir on Spotify with me, or treating me to dinner at one of Gordon Ramsay's London restaurants, their hospitality, friendship, and eagerness to learn about Holy Cross inspired me each day, and I am so thankful to have been a part of the Allen Hall Community for a semester.

Recently, I was serving Mass at Corby Hall with Fr. Bob Pelton, CSC. In his homily, Fr. Bob talked about the family that is the Congregation of Holy Cross, and shared that this emphasis on family and community is what drew him to Holy Cross. His powerful reflections almost moved me to tears. Being away from my brothers in Holy Cross for an entire semester was incredibly difficult for me. In London, however, my vocation in Holy Cross was both affirmed and strengthened. Over the past three years, I have come to know and love the Congregation of Holy Cross deeply, and the idea of being away from this community that I am so blessed to be a part of was daunting. During my semester abroad, God's call for me to continue formation in Holy Cross became even clearer, and I am blessed to have had the opportunity to experience so many new thingsnew friends, new places, and a renewed appreciation for the universality of the Church. As I move into these final weeks of my time in Old College, and prepare to enter the Postulant Program at Moreau Seminary, I am filled with gratitude for the semester I spent at Allen Hall in London. In my nervousness, God led me on a powerful journey of faith and mercy; it truly was an amazing experience.

Mr. Owen Williams is a junior in the Old College Undergraduate Seminary at the University of Notre Dame, buthe is currently studying abroad for a semester in London. Owenis originally from Avon, Ohio.