Living Among the Saints

Living Among the Saints

I remember looking forward to coming to Rome but not being super excited about it. I had not stopped to take the time to learn what Rome had to offer. Since coming here, however, my faith has been inspired in a completely different way than it had been in the United States, specifically through the lives of the saints.

For the English-speaking community in Rome there are what are called the Station Churches during Lent. Each morning, Mass is offered in an ancient church that houses an important relic or has played some other historical role in the history of the Church. One morning we were having Mass over pieces of Jesus' manger and then a week later over the bones of St. Cecilia, an early Christian martyr. At the same time that we were journeying through Lent to Easter Sunday, we were making a pilgrimage to the churches of saints like St. Laurence and Sts. Phillip and James on our way to Easter Vigil Mass in St. Peter's. 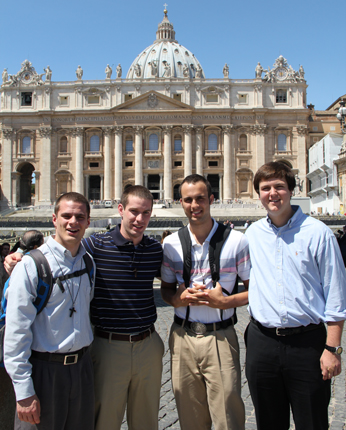 As Catholics we pray to the saints in order to come closer to Christ. We pray for their intercession on our behalf and for the strength to model our lives after theirs. In the United States, we typically do not have the same devotion to the saints that they do here in Rome. A priest who has lived in the Eternal City for over 20 years jokingly once told me, "Saints are a dime a dozen here."

Having such a strong cult of the saints gives the faith a concrete aspect I had not experienced before. There are so many examples of people who have lived their lives and given their lives for the sake of the Gospel. Living in a city where their relics seem to be on every street corner has slowly built up a fire in me to be a more faithful and devout Christian. 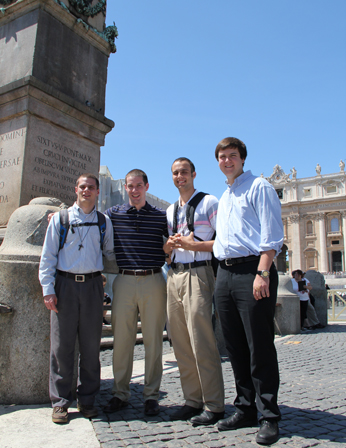 Through living amongst the Communion of Saints, which is so physically present in Rome, I have been encouraged to be strong in the faith of the Church, similar to the way in which my brothers in Holy Cross give me the strength to live as a seminarian. "Our community life refreshes the faith that makes our work a ministry and not just an employment; it fortifies us by the example and encouragement of our confreres" (Constitutions of the Congregation of Holy Cross, 4:33).

Mr. Bryan Williams is in his third year at Old College Undergraduate Seminary on the campus of Notre Dame. He and his fellow Old Collegians write a post each month for the Spes Unica Blog, sharing on their life and formation in Old College. He and three of his classmates have been studying in Rome this semester, as a study abroad experience which is part of formation for Old Collegians. Read about the experience of the men who studied in London in the fall semester.

And meet the current Old Collegians who are in formation for priesthood and religious life in Holy Cross.