The day after the canonization of Saint André Bessette, as related in our vocation pilgrims' blog of the events in Rome, the faithful gathered in Sant'Andrea della Valle for a Mass of Thanksgiving. At the Mass, the Archbishop of Montreal – His Eminence, Jean-Claude Cardinal Turcotte – presided and preached. Thanks to Fr. André Léveillé, CSC, we now have our own, unofficial English translation of the Cardinal's homily on Saint André. Enjoy! 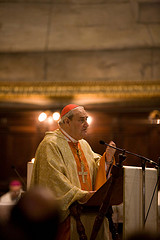 Dear Friends: Brother André, whom Benedict XVI has just canonized, was famous long before his death. He was daily welcoming lots of visitors and pilgrims in the chapel he had built on Mount Royal (in Montreal), Quebec, Canada. He was receiving two- to three- hundred letters a day. Four secretaries were needed to answer them. When he died on Wednesday January 6, 1937, at the age of 91, a shock was felt not only in Montreal, in Quebec and Canada, but also in the northern part of the United States and in Europe.

The news of his death was reported in a large number of newspapers. Over a thousand articles reported not only the event of his death but also described the life of a brother who had founded St. Joseph's Oratory in Montreal. The French newspaper Le Figaro wrote: "An extraordinary miracle worker has just died. Will Brother Andre be Canada's first saint?" Many Canadians hoped for it with all of their hearts. They rejoiced when Pope Paul VI declared Brother André "venerable" on June 12, 1978. Their joy was even more profound on May 23, 1982, when John Paul II beatified him. From the day of his beatification, pilgrims coming to the Oratory were invited to sign a petition requesting Brother André's canonization. Ten million pilgrims signed this petition. Pope Benedict XVI heard their voice. Brother André is now officially known as the first man born in Canada to be declared a saint. We are so very happy! 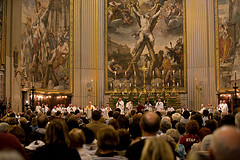 The church is filled with joy, especially the church of Montreal, the church of Quebec and of all Canada. The biblical texts just proclaimed point out the reasons why Brother André was declared a saint. It is because he allowed himself to be taught by God and was not pretentious before him. He became a saint because he stood before God as a poor man waiting and hoping to receive all from God. He was born in a poor family, his health was fragile, had little education, barely reading, and could only write his name. He was totally focused on God, totally attentive and satisfied by Him. That is why God fixed his attention on this poor and humble man and revealed to him what is hidden from the "clever and learned." God was intimate with him, so was Jesus and the Holy Family.

As we have heard in the Gospel, Jesus told his disciples: "Come to me, all you that are weary and are carrying heavy burdens and I will give you rest. Take my yoke upon you and learn from me." Brother André never tried to pass off his cross. He never tried to give to another the yoke that was meant for him. He carried his cross, without complaint. He carried it out of love, as Christ carried his own cross. One of his good friends, Joseph Pichette, remarked that Brother André often said, "Don't ask God to remove your trials, but rather to give you the strength to endure them." He would also say, "It was in those times when my trials were greatest that my work succeeded the most."

This is how the saints are. They resemble Jesus. They don't avoid suffering. They consider it a way to be united to God. A Holy Cross father who knew Brother André well and later became a bishop, Albert Cousineau, testified that brother had told him: "The closer you get to God the more you suffer." Today few preachers speak in this manner, saints, however, still do. They know it's true because they've experienced it. 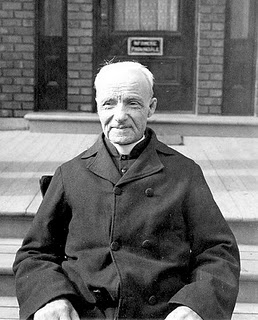 Brother André was a very welcoming and compassionate man. For dozens of years he went to his office on the mountain and listened to those who came to confide in him their sufferings, their worries, their hopes, their little and great troubles, their distress, their cries and their hopelessness. He listened. He invited them to pray. He prayed himself. He encouraged them to have confidence in God, to commit themselves to Him. He confided in St. Joseph the intentions he wanted to present to God. Once his prayers were answered he would say openly: "I've done nothing; it is St. Joseph who wanted it. He's the only landlord around here, and God wanted it as well." Brother André belonged to the kind of saints who want to help the lowly, the poor, the most unfortunate, the most sick among the men and women who live on earth. Is it not through the intercession of these saints that God accomplishes the greatest of deeds?

Thanks be to God for what He accomplished in Brother André. Thanks be to God to Benedict XVI for declaring him a saint. Thanks to all responsible for this warm welcome here at Sant'Andrea della Valle. Amen.

This is an unofficial translation of Cardinal Turcotte's homily done by the Office of Vocations.