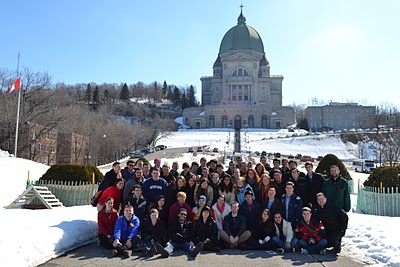 In the fall of 2013 I made a pilgrimage, along with a little over forty other students from Notre Dame, Holy Cross, and Saint Mary's colleges, to St. Joseph's Oratory in Montreal. Since we were not simply visiting the oratory, but were on a pilgrimage, the journey was just as full of excitement and spiritual growth as the time we spent in the Oratory. We visited many holy sites along the way. The first major stop on our journey was the shrine of St. Kateri Tekakwitha. Not only were we able to pray before her tomb, but we also had the privilege of attending Mass in which all the songs were sung in the native Mohawk language.

While in Montreal, a once thriving Catholic city, we visited a few of the very old, exceedingly beautiful churches. My personal favorite was St. Patrick's Basilica. Everything in the Basilica was ornate and very finely attended to; paintings of innumerable saints on the walls of the Church surround the congregation, reminding us that we are joining the communion of saints in worship particularly when we celebrate Mass. Walking into the Church moved me to tears. 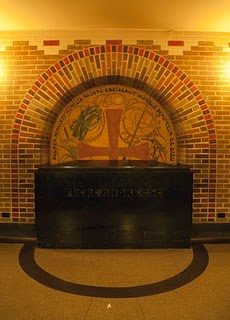 Of course, the Oratory itself was a magnificent building; I enjoyed all of the time I spent there. The votive chapel underneath the main Church struck me with a great sense of awe. All around, hundreds upon hundreds of crutches sent in by those who had recovered from illness through the intercession of St. Andre and St. Joseph stacked the walls. I have never seen anything quite like it. It was a beautiful testimony to the faith of St. Andre. Also in the votive chapel, we prayed before the tomb of Brother Andre. Above the votive chapel, we were also able to pray before the heart of St. Andre. Albeit a very strange experience, seeing his heart really drilled home how real St. Andre was.

While visiting all of these holy sites was an amazing experience for me, the greatest take-away from the trip was getting to know St. Andre Bessette. I had heard his name frequently, but I had never taken the time to look into who he was, or what he did. St. Andre is the perfect example of God's "power made perfect in weakness" (2 Corinthians 12:9). He was not supposed to survive the first few months of his life because he was deathly ill, yet by the grace of God he survived. The illness caused him to be weak throughout his life, and his weak body was always prone to illness. Education was never his strong suit either. Brother Andre started working at a very young age, but struggled finding success because his body could not handle the intense physical labor in the fields or factories.

When applying to the Congregation of Holy Cross, St. Andre was initially rejected. He could not perform any of the tasks that the community was involved in. He could not teach, for he was uneducated himself, and he could not do physical labor. However, Brother Andre did eventually get into the Congregation and served in the lowly position of porter for forty years. His job was to welcome students, parents, and visitors to Notre Dame College in Montreal. Yet, God worked through this lowly position, and used Brother Andre's humility and love to work miracles for the people of Montreal. Gradually, Brother Andre became known as the miracle man of Montreal.

My grandparents grew up in Montreal and had heard much of St. Andre from their parents. St. Andre died in 1937. He is not a saint of the distant past; he is a saint from the 20th century. His legacy is still alive in Montreal, especially in St. Joseph's Oratory, which was begun by his work. Even more so, St. Andre has a visible impact on the Congregation of Holy Cross, reminding all of us about the importance of humility and the beautiful fruits born from the willful submission of ourselves to God's will. St. Brother Andre Bessette is my role model for how I should strive to live my life as a seminarian and, God willing, a vowed religious.

Mr. James Henke was a student at the University of Notre Dame for two years before transferring into the Old College Undergraduate Seminary Program. He and his fellow seminarians regularly lend their news and views to the Spes Unica Blog. James is originally from Greenwood, Indiana.