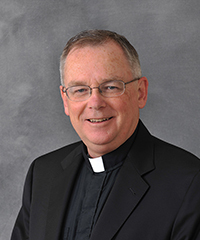 Something very unusual happened near the beginning of this academic year at Stonehill College: the inauguration of a new president, Fr. John Denning, C.S.C. Fr. John is only the tenth president in the history of the school and only the third in the last thirty-five years!

The inauguration ceremonies were a wonderful celebration of the accomplishments of the College and of the Holy Cross priests and brothers that have served here since the college opened in 1948. 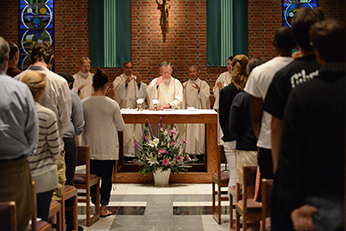 The Inauguration Week began on Sunday September 15, with a campus Mass celebrating the Solemnity of Our Lady of Sorrows, the patronal feast of the Congregation of Holy Cross. Fr. John presided and preached at the Mass, which included his receiving a blessing led by the three constituencies of the College: the students, the faculty/staff, and the Holy Cross community. This was our chance as the College community to bless Fr. John before all of the dignitaries and visitors arrived for the formal inauguration activities. 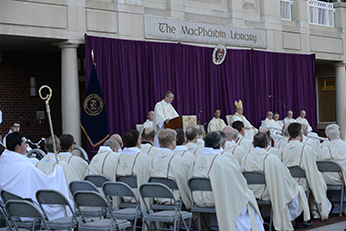 On Thursday, September 19, the Inauguration Mass was celebrated. We deliberately held the Mass outside, right in front of the library, so that the connection between faith and reason would be highlighted. The afternoon was absolutely perfect, not a cloud in the sky, with the temperature a comfortable 72 degrees. 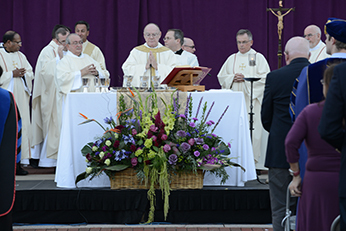 Our diocesan ordinary, Bishop George Coleman, presided, and Fr. Tom Looney, C.S.C. preached. As Fr. Tom said in his homily: "Fr. John, like every Holy Cross religious before him, who has exercised his ministry as an educator in the faith as president of Stonehill College, is entrusted with the office of president, as the bearer of the great and noble tradition of Holy Cross education as it was first articulated by Blessed Basil Moreau, founder of the Congregation of Holy Cross and has been embodied anew in each successive generation." 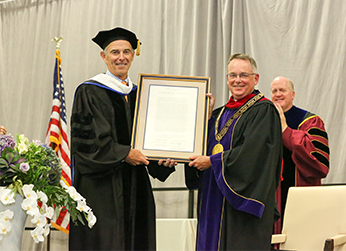 On the following day came the formal inauguration ceremony. The ceremony was packed and began with a procession of representatives of every single graduating class of the College, followed by the faculty in their academic regalia, and then representatives from many other colleges and universities. These representatives processed in order of the year their institution was founded. The representative from Harvard, established in 1636, was the first in line. Fr. (Edward) Monk Malloy, C.S.C., representing the University of Notre Dame, established in 1842, was fourth in line.

Following greetings from representatives of the student body, the Alumni Association, the faculty, and Fr. Tom O'Hara, C.S.C., Provincial Superior of the United States Province of the Congregation of Holy Cross, Fr. Denning was formally inaugurated as the tenth president of Stonehill College by Mr. Thomas J. May, Chairman of the College Board of Trustees. 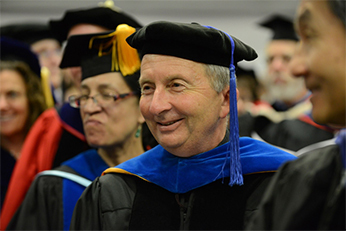 At the beginning of his inaugural address, Fr. John congratulated Fr. Rick Gribble, C.S.C., who just moments before had been awarded the Louise F. Hegarty Award for excellence in teaching. His words of congratulation summed up what Holy Cross means to Stonehill College: "Father Rick embodies the charism of the Congregation of Holy Cross. He's an educator in the faith, a gifted and talented teacher, a diligent and tireless researcher and scholar." May it ever be so for all of us who serve in our educational institutions.

Fr. Tony Szakaly, C.S.C. is the local superior of the Holy Cross community at Stonehill College, and previously served as an assistant provincial for the United States Province of Priests and Brothers. A South Bend native, he received a Holy Cross education at every level of his schooling, from the C.S.C. sisters in grade school, the C.S.C. brothers in high school and C.S.C. priests at the University of Notre Dame. He took final vows in 1991 and was ordained to the priesthood in 1992.