Divine Providence has blessed me greatly in assigning me to St. John Vianney Parish in Goodyear, Arizona, during my months as deacon. The parishioners have been welcoming and kind to this Midwesterner as well as great teachers in charity and devotion to the Lord. 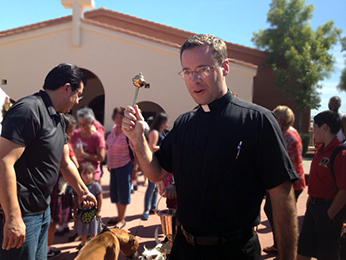 One of the aspects of parish life I love most is the great diversity of ministry. In any given week I am able to preach at Mass, spend time in our grade school's classrooms, prepare engaged couples for marriage, work with parishioners seeking annulments, assist with accounting projects, and prepare parents and godparents for their little ones' baptisms. In nightly Adoration I get to pray with some of the most devout people I have ever met.

One night, just a few weeks ago, I was leading repose of the Blessed Sacrament at 9:00pm and preparing to lock up the Church after the faithful left. It had been a long day joyful and productive, but I was beat. As I was locking the front door a Spanish-speaking couple came timidly up to me and I noticed tears in their eyes. I had just returned the week before from an intense Spanish immersion program in Mexico so felt ready, though still a bit nervous, to try and help this couple. They asked whether I could come to the nearby hospice center to hear their father's confession and give him final sacraments. I told them I was happy to come and pray but could not hear confession or anoint, as I was not yet a priest. They understood but still wanted me to come.

Since both the priests in our parish were already committed elsewhere, I grabbed my pyx and headed for the tabernacle. With the Blessed Sacrament, my Spanish prayer book, and some holy water I drove to hospice to pray with this dying man and his family. It was humbling to walk into this room. Gathered around this man visibly suffering and in his final hours were his wife, children, grandchildren and a night nurse. Most were crying and the man was gasping. In my best Spanish I asked if I could pray with him and he slowly nodded. Over the next few minutes we read scripture and prayed together. I asked if he was prepared to receive the Eucharist and tears welled up in his eyes. The man's faith and his family's devotion humbled me. With such limited Spanish I could not offer many of the usual expressions of consolation and comfort. This faithful man passed away a few hours later. 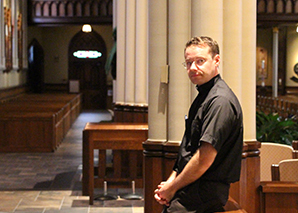 In prayer over the coming days I prayed for his rest and wondered if this man was now praying for me. I hope so. Though I look so forward to celebrating Mass and doing all the pastoral work in this parish I have prepared for, I cannot wait to be able give the Lord's absolution in confession and anoint the sick especially those in the last moments of their life on earth. Pope Francis preached "A good priest can be recognized by the way his people are anointed: this is a clear proof. When our people are anointed with the oil of gladness it is obvious And when they feel that the fragrance of the Anointed One, of Christ, has come to them through us, they feel encouraged to entrust to us everything they want to bring before the Lord." (March 2013)

I pray that I will be a good priest, a priest who is always available and generous. It is Jesus who blesses and comforts His people through us. I cannot imagine a greater privilege and joy than to serve Him and my brothers and sisters as His priest. 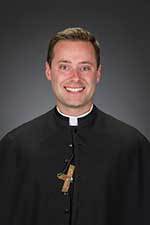 Deacon David Halm, CSC professed his Final Vows in the Congregation of Holy Cross last August. He is scheduled to be ordained to the priesthood on April 11, 2015. Deacon David is currently assigned to St. John Vianney Parish in Goodyear, Arizona. He is originally from Clyde, Ohio.