On Deck for "Forever"

On Deck for "Forever" 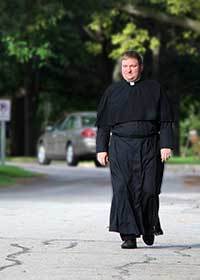 Seven out of the past eight years, I have joined the Holy Cross community in celebrating the profession of Final Vows. My freshmen year as an Old Collegian, I hardly knew the men who gave their lives over fully to the vows of chastity, poverty, and obedience; but I still felt a deep appreciation for what they did, and who they did it for. Each year I was able to join in this fantastic and joyful event that calls together Holy Cross religious from around the country. My year at the Novitiate was the only time I was not in attendance for the incredible weekend. Every time I heard those men say "forever," I was able to understand a bit deeper what that might mean for me. As I progressed in formation, the men themselves meant more to me, as I grew in familiarity with them for each successive class. The men professing Final Vows moved from older men in formation who I aspired to be like, to peers, to then being brothers.

This year, on September 13, six men made these Perpetual Vows to God. Two of them, Matt Fase, C.S.C., and Tim Mouton, C.S.C., I have known for quite some time. When I pulled up to Old College in August of 2007, these two were some of the first people who came out to the car to help me and my parents unload my luggage into the small brick house on St. Mary's Lake. As sophomores in the house, they immediately took on the role of older brother for us younger men. I remember hearing from them how exciting Final Vows weekend would be, following them to the plethora of liturgies, meals, and receptions. 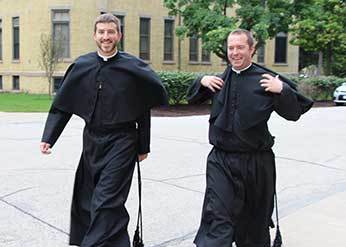 All these years later now, I was moved beyond words to see these two men, as well as their other four classmates who have become brothers to me as well, lay prostrate in the Basilica in prayer. They then knelt before our Superior General, in the assembly of Holy Cross and the Church, and vowed to live chastity, poverty, and obedience forever. That same word which year after year reechoes in the Basilica, "Forever," now came out of the mouth of the men closest to me in formation. Through all my time in formation, these men have been family to me. Our relationship strengthened after my own profession of temporary vows. At that point we were living the same rule of life, vowed to the same mission, working for the same Lord. But this was radically and permanently transformed when they were no longer members of the formation community. They are finally professed. Yet, they have only been one year ahead of me. 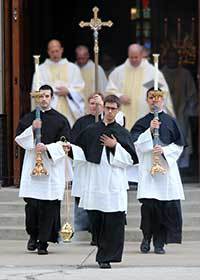 As we exited the Basilica to celebrate their gift of self to God and the Church in Holy Cross, I could not help but think of the future. I have a full year of initial formation left to do. I am excited to "run so as to win the race" for this year. But I am also filled with excitement, joy, and longing to join my older brothers. It was pointed out to me that day, that the next people to say "forever," would be my classmate, Dennis, and me. Time certainly has flown. Knowing that "my turn" is next and that I am "on deck" is incredible. I am thankful for all these years of growth in Holy Cross, most especially to that "great band of men" who "beckoned us to fall in step with them"; Men who made and lived by their vows, who because of their way of life became my closest neighbors, my trustworthy friends, my brothers.

Mr. Matthew Hovde, C.S.C., is in his third year of temporary vows and Master of Divinity studies as a seminarian at Moreau Seminary on the campus of Notre Dame. Matt is originally from Miami, Florida.