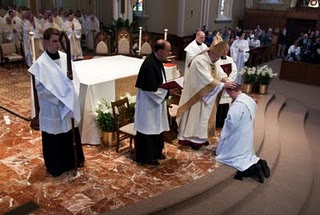 Feeling a little inundated by all the Royal Wedding coverage of Friday's nuptials between Prince William and Kate Middleton? Looking to hear about other important news and events beyond the marriage of Prince William and Kate? Well, we here on the Spes Unica blog have just what the Good Shepherd prescribed for you. On Saturday, April 30, two of our men in Holy Cross, Deacons John Britto, C.S.C., and Paul Ybarra, C.S.C., will be ordained priests by Bishop Daniel Jenky in the Basilica of the Sacred Heart at Notre Dame. Starting tomorrow, our blog will have exclusive and behind-the-scenes coverage of this amazing, news worthy event that is a great sign of hope for our Church and for our world.

Tired of hearing about Kate Middleton's wedding dress and who designed it? We will talk priestly vestments with Patty Schlarb, the Liturgical Seamstress at the Basilica, who makes the chasubles given to the ordinandi. We will also get the inside scoop on this year's vestments.
Had it up to here with talk about royal wedding traditions dating back a few centuries? We will speak with Fr. Jeffrey Allison, C.S.C. an Instructor in the Department of Theology at the University of Portland, about traditions in the Rite of Ordination that date back a few millennia!
No longer caring what the prefect wedding gift is for the Prince and the soon-to-be Princess? We will show the chalices that the ordinandi are receiving as gifts from their families and religious communities.
Wondering what it is like to attend Ordination when it is your turn next year? Mr. Matt Kuczora, C.S.C., the "Seminarian on Deck" in Holy Cross, will share his thoughts and feelings from this year's ordinations.
And that is just the start of it! We also have exclusive access to many of the weekend's homilies, including the first Mass homilies of both ordandi that will go live on our blog during their first Masses. To see the full slate of Spes Unica's exclusive Ordination Week coverage, click "read more" and stay tuned. It all starts tomorrow with, of course, a reflection from Mr. Adam Booth, C.S.C., a first-year professed seminarian in Holy Cross who hails from Great Britain. He knows a thing or two about royal weddings, but he knows even more about ordinations. And so, let the graces begin!

Tuesday, April 26 – "The British Perspective" – Mr. Adam Booth, C.S.C., First-Year Professed Seminarian, hailing from Great Britain, reflects on the upcoming ordinations.
Wednesday, April 27 – "Sewn in Love and Faith" – An exclusive interview with Ms. Patty Schlarb, the Liturgical Seamstress at the Basilica, about the making of the ordination vestments in which we get a scoop on this year's vestments
Thursday, April 28 – "One Year Later" – Fr. Gerry Olinger, C.S.C., Executive Assistant to the President at the University of Portland, reflects on his first year of priesthood.
Friday, April 29 – "The Making of a Feast" – An exclusive interview with Mr. Ralph Pieniazkiewicz, the head chef at Moreau Seminary, on what goes into making Ordination Weekend a festive occasion, including the unveiling of this year's ordination dinner menu

Friday, April 29 at 9:30 p.m. – Ordination Lucenarium Homily – As Lucenarium is still being prayed at Moreau, we will post the homily on priesthood given by Fr. Andrew Gawrych, C.S.C., the Associate Director of the Office of Vocations, as well as pictures of the ordinandi's chalices
Saturday, April 30 – The Traditions of Ordination – Fr. Jeffrey Allison, C.S.C., an Instructor in the Department of Theology at the University of Portland, shares about some of the traditions in the ordination rite
Saturday, April 30 at 2:45pm – While Ordination Mass continues, we will post pictures of the ordinandi's vestments for those who are unable to attend.
Sunday, May 1 at 10:30am – The First Mass Homily of (no longer Deacon) John Britto, C.S.C.
Sunday, May 1 at 12:15pm – The First Mass Homily of (no longer Deacon) Paul Ybarra, C.S.C.
Monday, May 2 – "The Seminarian On Deck" – Mr. Matt Kuczora, C.S.C., Third-Year Professed Seminarian, reflects on Ordination Mass in light of being the next one up in Holy Cross to receive the Sacred Chrism and the Laying on of Hands.
Tuesday, May 3 – "The Hope it Brings" – Fr. Tom Bertone, C.S.C., Assistant Provincial of the Eastern Province of Priests and Brothers, brings our coverage to a close, reflecting back on his own ordination as well as on the hope that the ordinations of these two men of God means for Holy Cross, the Church, and the world.