Our Mission and the March for Life

Our Mission and the March for Life 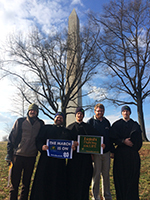 On January 22, nine Holy Cross seminarians from Moreau Seminary and Old College, and four Holy Cross priests, joined hundreds of thousands of protestors in Washington DC for the March for Life. While I was marching, I was reminded of a passage from our Constitutions:
Our mission is not simple, for the impoverishments we would relieve are not simple. There are networks of privilege, prejudice, and power so commonplace that often neither oppressors nor victims are aware of them. For the kingdom to come in this world, disciples must have the competence to see and the courage to act (Const. 2.14).
Our Constitutions urge us to stand against systems of injustice. When it comes to certain impoverishments, the guilt does not rest on one person's shoulders alone, but on many; this is what we mean by "systems of injustice." Legalized and ready access to abortion is the most obvious and severe example of such an injustice. The March for Life is one of many actions that confront the political systems that allow such an injustice to prevail. But upon further reflection, the protest runs much deeper. Cameron Cortens, one of two Postulants on the March, expressed it correctly: "It seems that the March for Life is not just a political protest it's a cultural one."
Yes, the abortion crisis is not fundamentally a political one; it has roots that spread wide through our culture. It comes from flawed notions of sexuality, lack of responsibility, lack of support for mothers and fathers, and many other problems that effect young people today. This lies at the heart of Holy Cross' mission. Although we take the political situation seriously, most of us are not political activists. "For many of us in Holy Cross, mission expresses itself in the education of youth" (Const. 2.16). This is a tremendous gift we possess! Like our zealous founder, Basil Moreau, men in Holy Cross strive to heal the infirmities of our world in and through the formation of young people. It is precisely as educators who live and work in direct relationship with the youth that we can play our part in the struggle for a culture of life. 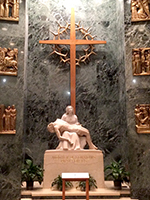 As a matter of fact, we dare to hope that our mission will have more than a small impact. Basil Moreau also lived in a culture marked by pleasure and immorality when he wrote, "Christian education alone can remedy this evil and hasten the return to beliefs and practices of religion by bringing up the coming generations in these principles" (Christian Education). In Holy Cross, we share this optimism with our founder. In a culture plagued by crisis after crisis, the Congregation of Holy Cross finds itself in a position to take many of their causes head on. In our educational institutions, in our parishes and our ministry to families Holy Cross stands on the front lines, so to speak. Even though our mission might not overthrow abortion and other injustices, we are optimistic that we have the right foundation and the "competence to see" the fulfillment of the Kingdom. 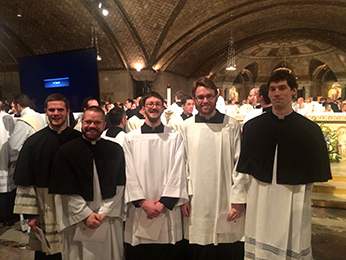 For example, perhaps the greatest Pro-Life witness is contained in the acceptance of a child. Basil Moreau was blessed with a deep and joyous love for children. As his sons, it seems to me that every Holy Cross priest and brother expresses this same loving acceptance of children in some way or other. Our parishes and schools around the world are filled with an abundance of young people. We in Holy Cross are given the daily opportunity to rejoice in the "dignity of every human being as God's cherished child" (Const. 2.15). Holy Cross has inherited a vision a way of seeing that allows us perhaps not to defeat the injustice of abortion, but to strike at is root and make the Kingdom of Life real in our communities.
My conclusion: as a man deeply affected by the Pro-Life movement, Holy Cross is a place that I want to be. While I was standing next to my brothers in the midst of over a half a million people on the March for Life, I experienced my call again.

Mr. Karl Romkema, C.S.C., is in his first year of temporary vows with the Congregation of Holy Cross. He and his brother seminarians are currently studying in the M.Div. program at the University of Notre Dame. Karl is originally from Clarkston, MI.