Our resurrection and our life

Our resurrection and our life 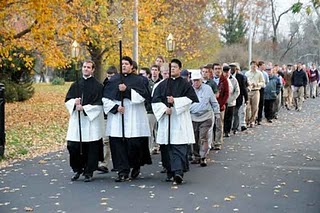 Every November 2nd, on the Commemoration of All Souls, we in Holy Cross in communion with the whole Church celebrate our faithful departed. As our Constitutions state, "The footsteps of those men who called us to walk in their company left deep prints, as of men carrying heavy burdens. But they did not trudge; they strode. For they had the hope." The Holy Cross community in the Notre Dame and South Bend area gathered this afternoon for Mass and a procession to the community's cemetery. The following is the homily preached at the Mass by Fr. Kevin Grove, C.S.C., who was ordained April 10th of this year.

Each year after this Mass, we process to our community cemetery and spend a short time there in prayer and contemplation. And something sacred happens for our community in those minutes among the even rows of simple graves; something I didn't have words for until after final vows, until after another experience gave me some perspective.

As a seminarian, I was afforded the chance to witness a ritual that had never before been open to me. Fifteen miles off of the nearest highway in Montana is a small and abandoned Catholic church in what can only be considered a very scenic ghost town. In some ways, it is not much to behold; in other senses, it is a marvel. There my relatives built the church in order that they might receive their sacraments in a church in the new world. But it held an even deeper ritual that I was going to encounter. For decades, the Czech ladies of my family whose loved ones' remains rested in the little Church cemetery had gathered once a year to drive to the cemetery, clean the lichens off of the marble tombstones, decorate them with some advertised-as-weatherproof-but-have-never-proved-to-be-so flowers, and pray for the souls who had gone before them. This in itself might not be so remarkable, but the grave cleaning ended with a second part of the rite. After they finished, someone would pull cans of pop from a trunk and they would sit on the ground, leaning against their vehicle tires and recount the stories. That was why they were there. They gathered each year to tell the stories, to make present again in the tales of boat rides, wooden legs, and farming on a frontier, the stories that defined who they were. And with a candid reverence, they go about the work of remembering each and every year. 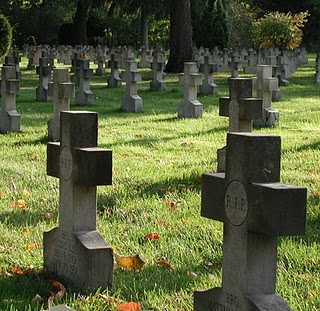 I learned a powerful part of my family's story, but also gained words for something in Holy Cross. However we come to it, our lives in Holy Cross are marked by the same sort of holy remembering. For my part, my very first visit to Holy Cross in this place began with a community funeral. After arriving from a red-eye flight, then seminarian Pete McCormick dropped me off at a funeral while he went to class. It was, as one of our priests kidded aloud, a double header: two missionaries at once. Perhaps on account of the afternoon funeral time or the doubled need for pallbearers, within the first hours of my vocation visit, I was hoisting one of Frs. Bauer or Hickens into a hearse after his funeral Mass. It was the only time I ever have ever seen Jim King, then vocation director, look even slightly taken aback.

But since that day, I have noticed that time in Holy Cross has been marked and remarked by the stories of this blessed place. And it is what makes this day such a hallowed one. After the Eucharist and our invocation of the entire heavenly host, we take the holy walk to tell the stories. Friends visit their friends, older men tell the tales of salvatorists and Josephites, shysters and saints, point out servants of God, the kindred spirit and even the curmudgeon. "There's McCauley." "There's McCafferty." they say. Others forecast where it is their earthly remains might rest. Sometimes the narrators chuckle, and other times they choke back tears.

The implications of this blessed walk extend beyond the feast. When asked to write a reflection on their lives in Holy Cross, our men most frequently speak of the spiritual peace of this very cemetery. And, the abiding advice that priests and brothers give to young men approaching their perpetual profession of religious vows is to walk through the cemetery on the way. Pray for those men; and ask for their prayers. 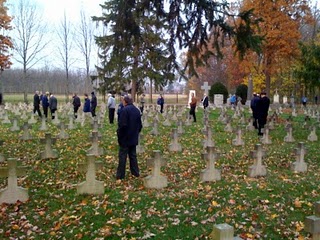 We walk among the headstones today as Wisdom says, celebrating those with understanding, those whose unsullied lives went home to God sooner than the rest, and praying for those who need our intercession. A silent wisdom is passed there; we walk amid the ranks of citizens of heaven. And the emotion is mixed-joy and apprehension—at the reality that one day soon or late we will join them there.

But Martha proves to us that we are not merely narrating these stories for old times' sake. No, a greater purpose is here. In her exasperation with her friend Jesus, He got out of her a very old story, a very old reality: that her brother would rise again on the last day. She knew it and she believed it. But that was just the retelling. What happens next is the most important part. In the conversation when she tells Jesus what has happened as well as what she believes, He reveals to her what is transforming: "I am the resurrection and the life." Jesus already knew what had happened to Lazarus. But, Martha had to say it. She needed to retell that story and what she already believed in order to open herself to the full reality Jesus was going to present to her. It is in the very detail of the story and her struggle with belief that Jesus is able to reveal himself and his life.

And so it is for us. When we read the necrology and an older member of our house starts to smile knowingly or tells a story at dinner, we are beginning a conversation of resurrection and life. When another retells the tale of a religious who died young, we are beginning a conversation of resurrection and life. Our retelling the stories is not only for nostalgia for them, but for salvation for us. Let the stories of those who have gone before us not pass our lips in vain this evening. Their stories have meaning because every narrative, every sin, every fault, fight, forgiveness and accomplishment finds itself part of a greater narrative, in which Jesus reveals more clearly His life and resurrection unto you and unto me. We gather here again because it is in our conversation and in our remembrance that we not only state our belief in the resurrection, but we, like Martha, listen to Jesus say to us: I am your resurrection and your life. 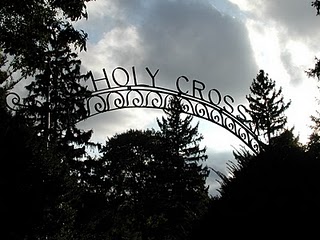 We gather to pray for the souls of our brothers, to retell their stories, and in so doing realize that this is a holy process in which Christ reveals to us life anew. In their stories, Jesus gives us the words today to say in our own as we leave that cemetery gate: Yes, Lord…you are the Messiah, the Son of God, the one who is coming into the world.