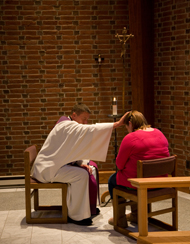 As a postulant at Moreau, my year-long ministry placement has been at the parish of St. Adalbert's, where I catechize children enrolled in the parish's First Communion program. Those who are in their second year of preparatory classes reached an important juncture two weeks ago, when they received the Sacrament of Reconciliation for the first time in their lives. It was a significant moment for me too, having journeyed with these children throughout the past few months, doing my best to open up to them the message of Jesus Christ's saving love. And I think they got it. Talking to them quietly in the pews while they waited for their turn to confess their sins to a Holy Cross priest, I had no doubt that many of the grade-school children sensed the importance of what they were about to go through that night. Some of them were aglow with eager anticipation; others were frightfully nervous about the process but equally resolved to see it through. Every one of them had spent time reflecting on what it was in their lives that needed healing, that cried out for the Lord's forgiveness. So, yes, I definitely think they got it.

The very next day after the first confessions, our liturgy's Gospel reading brought to my attention Mark's story of Jesus' first missioning of his apostles. Christ sent forth the twelve with the task of preaching repentance. It struck me that I had been carrying out the very same mission in the lives of my young students. But then it also struck me how much harder a mission this is to carry out in the complicated adult world, where oftentimes a pure and faithful receptivity can harden. On the one hand, as we grow older and smarter, we are endowed with the abilities of more thorough and profound self-reflection. Yet as our rational capacities grow, so too does our rationalizing capacity, so that we become more adept at explaining away sin in order to minimalize and excuse it, instead of recognizing it and allowing Christ to confront and overpower it. As Christian adults, we are able to experience Christ's forgiveness in deeper ways, but we also develop keen skills in erecting barriers of pride that block us off from that experience. 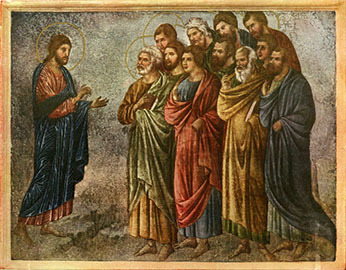 Meditating on these challenges in the context of my formation for the priesthood brought to my mind the question, Am I really strong and sure enough of myself to devote my life to this mission of preaching repentance? Sitting in the Moreau Chapel at Mass, I sat poised and attentive after the last words of that Gospel reading drifted from the ambo to the congregation. I hoped that the homilist would offer some encouraging words to help me with my lingering question. Our homilist was Fr. Mike Connors, C.S.C., who teaches preaching to the older seminarians.

His first words: "I don't like preaching. Honestly, I don't." Hardly the inspiring battle-cry I was looking for. But he went on to explain that the reason for this dislike was Jesus' condemnation of the Pharisees who "tie up heavy burdens and lay them on people's shoulders, but they will not lift a finger to move them" (Mt 23:4). Fr. Connors admitted that in every act of preaching, there was a nagging suspicion that these harsh words might apply to him. What he was expressing was an acute awareness that the first step to preaching the Gospel of repentance is to be challenged and humbled oneself by that Gospel message. I have the growing impression that this awareness is shared by many of the Holy Cross priests whom I've been getting to know in my first year as a seminarian. In fact, I think it is what lends power to the most effective preaching I hear at our liturgies at Moreau and around Notre Dame. 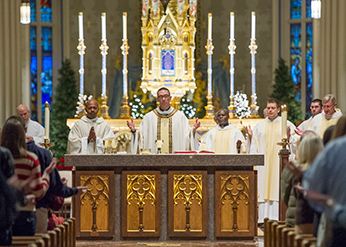 Clearly Jesus knew this truth when he sent the twelve out on their mission. For he sent them out in conditions that forced humility upon them: "No food, no sack, no money in their belts" (Mk 6:8). They were made to experience their own weakness and need by placing themselves in a position of full dependency upon God's loving care and the generosity of those whom they visited. Only then could they authentically bear to others the message that we must all look with penitence to God, Who alone can fill our every need.

Cameron Cortens graduated from the University of Notre Dame in 2013. He then spent a year teaching in the House of Brigid program in Ireland prior to joining the Moreau Seminary Postulant Class of 2014-15. Cameron is originally from Boise, Idaho.