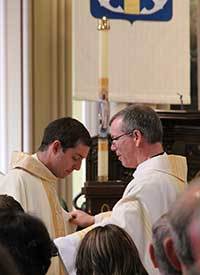 When you get ordained to the priesthood, you know to expect a whole new set of awesome firsts your first Mass, hearing your first Confession, your first Anointing, etc. However, there are also those firsts that you don't know to expect. They creep up on you and take you by surprise. They make you laugh at yourself and at the God who has chosen you, in his mercy, for this ministry. Here, then, are some unexpected firsts that you might discover as a newly-ordained priest.

Chrism Triggers The smell of chrism has a way of lingering, even beyond ordination day. It's kind of like how you can feel your phone vibrating in your pocket, even though you know it's charging on the other side of the room. The aroma catches up with you from time to time and breaks back open the joy you felt when the bishop anointed your hands. Deodorant shopping becomes awkward. The guy perusing the Old Spice rack with you wonders why you're just standing there with this stupid, little grin on your face. He doesn't know that "Swagger" has triggered a memory, and lucky for you, it's on sale!

Being Called FatherBy Your Father! You still have vivid memories of how proud you felt when, at four years old, you remembered to call your Dad "sir" for the first time, and therefore got to put a gold star next to your name in the Manners Book. Now, this man who taught you to throw a baseball, who gave the star performance in your seventh-grade Bring Your Parent to School Day, who (wisely, you admit now) convinced you to attend college where you would incur the least amount of debt, who threw himself behind every one of your dreamsthis man now walks up to you with tears in his eyes and calls you by the name that you first gave to him. His words have sacramental value, too. His saying it makes it so. 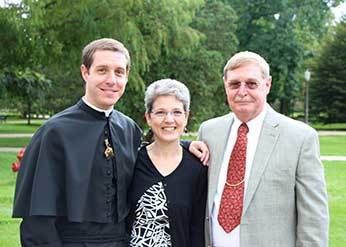 Realizing You're a Priest You know in your head that you're a priest now. The bishop said all the right words. He did all the right things. He had all the right intentions. Poof priest! It can take some time, though, for that head-knowledge to sink into your heart, even after you've said a few Masses and heard a few confessions. Then one day, you're driving down the interstate, radio off, minding your own existential business, when the Spirit intrudes and whispers in your ear, "That was the most important day of your life." And it hits you. You really are a priest. This thing you've wanted to be for twelve years, that's you now! You lose it, and through the tears, you come to yourself. Your heart catches up with your head, and you awaken to who you are.

"Ordaining" Your Friends Ok, technically, you didn't ordain anyone. The bishop did. You were just there to lay hands on them. However, there is something surreal about attending your first ordination as a newly-minted priest. It's kind of like having an out-of-body experience. On one hand, you're close enough in time to your own ordination and in friendship to these men at their ordination that you can put yourself in their freshly-polished shoes. On the other hand, you're no longer constrained by the sort of hyper-sensitized awareness that characterized your experience of being made a priest. You can actually sit back and enjoy the sights and sounds and smells and bells with a certain levity of spirit, which allows those sacramental elements to speak to you and to reveal to you the sheer depth of what took place in you mere weeks ago. You are overjoyed that your friends are now fathers and brothers to you in a whole new way. You also see yourself reflected in their radiance of spirit. 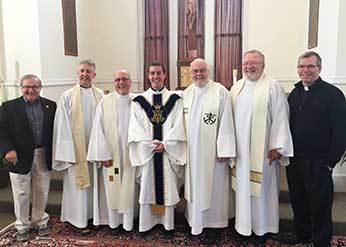 CONcelebrating Mass Even before ordination, you were a Mass-Master. You've been going to Sunday Mass your whole life and daily Mass since college. You know the difference between a collect and a collection. You know when the priest is using an approved dismissal from the 2011 Roman Missal and when he's fudging with the 1978 Sacramentary. But then you go and become a priest, and all that mastery goes out the window, because now you're faced with the Rubrics-Cube-level dilemma of what to do with your hands. You've been practicing your presidential orans-es, but you haven't quite gotten your epicleses down pat, and while you're over-thinking the curvature of your fingers, the main celebrant has started in with the anamnesis, but you're still in orans mode, and don't you look the fool now in front of everybody. You laugh, though, because through this awkward process of developing liturgical motor memory, you are getting a feel, literally, for the choreography of divinization. You're all-hands-in on the means by which God makes us sharers in the Divine Nature. You raise your arms in celebration, because this is what you were made for.