It is a long tradition in the Catholic Church that newly ordained priests receive a chalice upon their ordination. Many times family members or parishioners will provide the chalice as a gift to the new priest as a token of their esteem. In Holy Cross, when one of our priests died, his chalice was sent to the sacristy of Sacred Heart Basilica at Notre Dame. The most historic and beautiful ones went on display in the Basilica Museum, the Bishops' Museum or the Log Chapel Museum and were used for liturgies on campus. Other chalices went to the dorm chapels, parishes or the international missions for use at Mass. But most just went into storage. 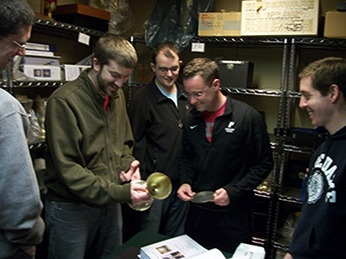 Some years ago when I was visiting Moreau Seminary, a group of our transitional deacons were leafing through catalogues in the process of picking out their ordination chalices. I mentioned that we had a large inventory of chalices from our deceased confreres in storage. They were immediately interested in seeing the chalices. They said how much it would mean to them to have a chalice that was used by an elder in the community who had lived out his priesthood in Holy Cross. So I took them to the chalice room and a tradition was born.

It is a fascinating experience to see how these men choose their chalices. Some are drawn to a certain style and make a quick decision. Others peruse hundreds of chalices before they make a decision. Some choose a chalice that has decorative elements that appeal to them, like cloisonne medallions of the four evangelists or an engraved image of the Blessed Virgin Mary. Still others chose the chalice of someone they may have heard of in the community, like the former rector of the dorm they lived in as students. One young man was interested in Hispanic Ministry so he chose the chalice of one of our priests who was a pioneer in that ministry in Holy Cross. A few chose the chalice of a priest who was a family friend. Some chose the chalices of elderly priests that they got to know through their visits to Holy Cross House, our retirement house on campus. 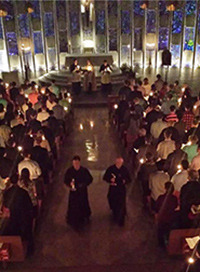 After choosing a chalice, the men will then have it refinished so that each chalice looks brand new. On the bottom of the chalice, right alongside the original priest and his donors, they add the names of their own family and friends. It means a great deal to our young priests that at each Mass they use the chalice, all of these people, both new and old, will be remembered. I can only hope that someday after I have gone home to God, someone chooses my chalice. Then, at each Mass, God willing I may also pray with that young priest as he remembers me and my family.

Fr. Tony Szakaly, C.S.C., is the local superior of the Holy Cross community atStonehill College,Director of Campus Ministry, andAlumni Minister at Stonehill College. A South Bend native, he received a Holy Cross education at every level of his schooling, from the C.S.C. sisters in grade school, the C.S.C. brothers in high school, and C.S.C. priests at the University of Notre Dame. He took final vows in 1991 and was ordained to the priesthood in 1992.