Researching for Understanding, Healing and Hope

Researching for Understanding, Healing and Hope

This past June, I had the privilege of serving as a faculty member for the Museum of Jewish Heritage's Fellowships at Auschwitz for the Study of Professional Ethics (FASPE) program. Together with other academic colleagues and seminarians from various faith traditions, we traveled to Berlin, Krakow, and Owicim, to visit sites related to the history of Germany under National Socialism and the Holocaust of European Jews. We were reflecting upon this troubled history in order to apply its lessons to the ethical challenges facing those engaged in pastoral ministry in the modern world.

It is always a humbling and daunting challenge to walk under the Arbeit Macht Frei – literally, "work makes freedom" – sign marking the entrance to Auschwitz concentration and death camp. This summer happened to be my 10th time making this journey to Auschwitz. I have made it previously on travel experiences with fellow professors and undergraduate students. Unlike the victims of Nazism, however, I have always had the fortune to be able to leave and enter Auschwitz, now a memorial museum, at will. So many millions did not have this choice.

Why, might you ask, do I regularly engage this history and make such a journey, especially as a Catholic priest? My answer is that I do so specifically because this history is integral to Christianity. National Socialism's hateful racial ideology ultimately found its roots in Christian antisemitism that first negated Jews, then labeled them as "Other" – unworthy of salvation and consideration as neighbor. The majority of perpetrators in the Holocaust were baptized Christians. Today the world and the churches often conveniently forget this essential fact. In certain countries, in the late 1930s, Catholic priests held political positions in which they actually facilitated the roundup and deportation of Jews and, in some instances, even participated in the killing process. 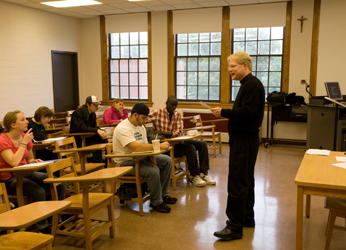 As a Catholic and as an ordained member of the Congregation of Holy Cross, it is integral to my vocation, both as a priest and as a professor, to ensure that Christians are aware of their Church's dark legacy and to combat antisemitism, its annihilative effects, and any form of racism in the contemporary world.

Coming from a family of educators, I too, felt called to teach. As a high school student, I attended Bishop McNamara High School in Forestville, Maryland, sponsored and administrated by the Eastern Province of Holy Cross Brothers, now the Moreau Province. There, I witnessed and experienced the dedication of Holy Cross religious as teachers. I was truly drawn to their beautifully integrated religious life and educational vocations. At the same time, I felt called to the priesthood and, with the brothers' support, I pursued my calling by entering the Candidate Program at Stonehill College. There, I declared history as my major. Upon graduation, I completed the required novitiate and theological studies and was ordained.

Holy Cross, with its commitment to educating the mind and heart, supported my apostolic call to become a historian and professor and sent me to graduate school in history at Boston College in Chestnut Hill, Mass. There, I studied the history of modern Germany, specializing in church-state relations during National Socialism and the Holocaust. 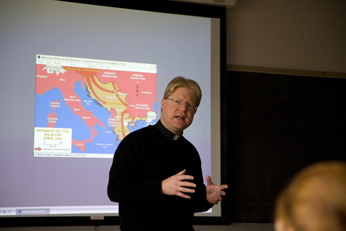 My vocation as a priest and the apostolic ministry in which I engage as a professor of history are intertwined and incredibly rewarding. As a professor, I am required not only to teach, but also to write and publish about my area of specialty. As a priest, I am intrigued to learn how ordinary clergy responded to Nazism. At first, I investigated this question in the diocese of Berlin, Germany, and produced the book, Resisting the Third Reich: The Catholic Clergy in Hitler's Berlin, in which I describe a very mixed record for Berlin's priests – a few resisted a few embraced Nazism, but the majority stood by remaining silent bystanders or resisting only when the state limited the freedom of their pastoral ministry.

The group who embraced Nazism raised my curiosity enough to research this topic even more in a number of archives throughout Germany. The result is my second book, Hitler's Priests: Catholic Clergy and National Socialism, which details those 138 priests who openly supported National Socialism. Theirs is a tragic story of warped, distorted Catholicism, but of Christianity nonetheless, permeated by extreme nationalism and antisemitism. Currently, I am engaged in a new book project which further investigates the overall history of Jews and Catholics under National Socialism.

As both a priest and educator, I feel called not only to research and teach about the past, but also actively to engage both Christians and non-Christians, in an ongoing dialogue regarding the question of legacy of National Socialism. Both regionally through the Catholic-Jewish Dialogue Committee of Stonehill College and nationally through the Council of Centers on Jewish-Christian Relations (CCJR) I participate in Jewish-Christian dialogue. Through these groups, I work for greater understanding, healing, and a more positive future for Christians and Jews.

I am thankful to Holy Cross for allowing me to live my call both as a priest and as a professor. The two together put my faith and hope into action for the Gospel's purpose of truth, justice, and compassion. I encourage you to do the same by taking a serious look at Holy Cross and see if you, too, are called to join us as we work to educate the minds and hearts of those we serve.

Fr. Kevin Spicer, C.S.C., is the James J. Kenneally Distinguished Professor of History at Stonehill College in Easton, Mass. As he explained in his post, his research centers on the relationship between the Roman Catholic Church and the German state under National Socialism. Fr. Spicer took Final Vows in Holy Cross on August 31, 1991 and was ordained a priest on June 6, 1992. This post continues our series for the Spes Unica Blog in which we hear from some of our Holy Cross scholars who work in education. Learn more about the work of Holy Cross in universities and colleges, as well as our men in advanced studies preparing for such work in the future.