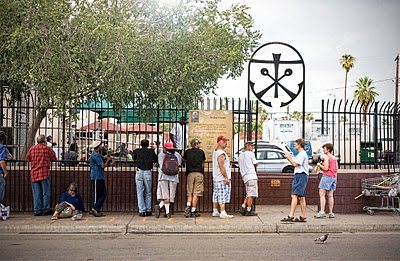 Spring is in the air – at least in some parts of our country – and it is in Fr. Eric Schimmel's latest blog post from André House in Phoenix.

Spring cleaning happens in different ways for different people. When working at a place like André House, one gets to see the results of other peoples' spring cleaning efforts as they bring down the "cleaned" items to us as donations. Generally we appreciate these donations as they can really help us in our clothing closet, or stocking our showers, etc. We have been known to get some very interesting donations as well, but I will leave those stories for a different time.

One project that we decided to tackle this spring at André House was replacing the carpeting in the bedrooms and stairs at the staff house, affectionately called "Mom's." I have no idea when in the 26-year history of André House they put in the carpet that was in Mom's. All I know is that some of it looked like it may be about as old as some of the staff members. So, we decided that it was time to replace what we had. 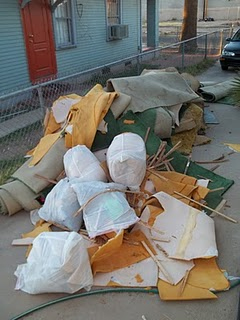 Of course, desiring to remain faithful to our simple lifestyle and trying to minimize the costs of replacing carpeting, the staff also decided that we would remove the old carpet and padding ourselves. I must admit that I could not refrain from making the Darth Vader breathing noises when I first put on the blue mask to keep the dust, etc. out of my lungs. Nor am I the only one who imitated the Dark Villain who experiences conversion at the end.

We jumped right in – moving furniture around, ripping and cutting carpets. Pretty soon the carpet was all removed. I felt good about the project, and proud of how much we accomplished so quickly. Then I realized that we were doing this project on Friday, April 1st, and this "April fool" had not counted on the need to pull up the wood tacks. We had created a great mound of carpet and padding outside in a relatively quick fashion, especially considering we were doing five rooms, a set of stairs, and a hallway. Taking up the strips of wood with the little tacks in them that were nailed to the floor . . . well, let's just say that took more than twice as long to do. I should add that God provided his own April Fool's joke – that Friday was the first day Phoenix hit 100 degrees this year (the high is usually in the mid 80s right now). 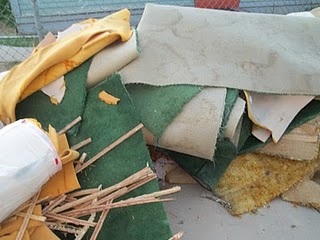 At the end of the day, we accomplished a lot. Now we are working on choosing the carpet that will go into the upstairs rooms and preparing the concrete floors downstairs for staining/finishing. Yes, I know that this means that the staff is temporarily living in a house that is still a bit torn up and disheveled as they can't put things back into place until the floors are all re-carpeted/finished. On the bright side, we hope to have everything all done by Easter. Until then, you know one of the Lenten sacrifices here at André House – living in a house that is still working on being a home.

The front yard of Mom's House provided another reflection this month. We have a planter underneath one of the windows in the front yard. The dirt in that planter looked like it had seen better days, so one of our staff members took on the task of overturning it, mixing in some things from the compost pile at Mom's, and planting some seeds. Well, the first things that came up looked like discarded vegetation trying to resurrect itself from the compost pile. Those shoots were removed, and the eager residents of Mom's waited to see if anything would come of their project.

Just as it seemed like we should give up hope, some of the flowers originally planted have started to grow and to blossom. This definitely did not happen according to our time as we expected them to grow earlier, but grow and bloom they did. 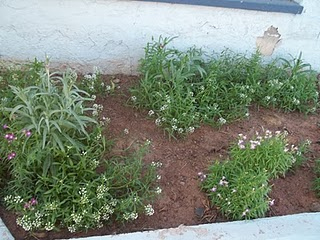 This reminds me of our work here at André House. One of the things we do here is plant seeds. We do not necessarily do so through intentional evangelization – pulpit pounding and the like. But we do try to do so in the way that we try to treat each person who comes here with dignity and respect. Sometimes the soil in which we try to sow God's love does not seem so good. It needs to be worked and fertilized. I can assure you that we have enough fertilizer here too. But even when the soil is well tilled, seeds well planted, and everything well taken care of, the first shoots you see may not be what you expect. You may still find discontent expressed in various ways, or people caught in destructive cycles. But if you keep at it, there is hope. Many times I have seen the bad cleared away yet again, and healthy branches shooting forth. Those shoots could come in the form of reconciliations, people finding and keeping a job, or even just in a calming of a person's attitude/spirit. 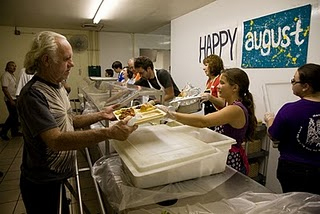 I know that we are still in the season of Lent, looking forward to the season of resurrection. But I assure you that Spring has started, and signs of new life and resurrection are around us. May we open our eyes to see them.