Sermon on the Street: Living out of a Trailer

Sermon on the Street: Living out of a Trailer 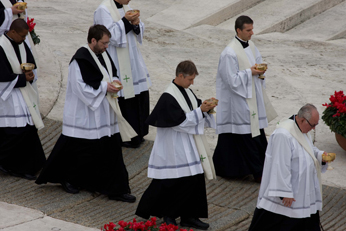 Fr. Eric Schimmel, C.S.C, has sent us the third installment in his monthly posts from André House in Phoenix. Today we learn how installing a new fridge can teach us how it pays to have faith.

October was incredibly joyous for us at André House as Br. André Bessette, C.S.C., was canonized. I had the awesome privilege of attending the canonization in Rome and serving as a Eucharistic minister during the Mass of canonization. Words cannot describe the feeling of praying at St. Peter's as the special patron of your ministry is canonized.

Upon returning home, we jumped into a big project – replacing our walk-in fridge/freezer. When you run a soupline serving over 550 meals a night, one of your most important appliances is the fridge. We are blessed to have one here at André House. The only problem is that the one we had was getting old and starting to leak. So, after receiving a grant, we scheduled to have our walk-in fridge and freezer replaced the week of October 24. 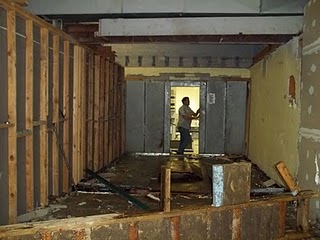 erhaps I should have known not to schedule something like that to start four days after returning from overseas. Projects tend to take longer at André House than originally planned – one might say that we are very familiar with Murphy's Law here. Maybe I should also have considered the fact that the week of October 24 leads up to Halloween. Still, with faith in God and the intercession of St. André, we decided to move forward with the project of replacing the walk-in fridge/freezer unit without shutting down our soupline. Just because we have a major project going on does not mean that the people we serve magically are no longer hungry. We had to keep serving. 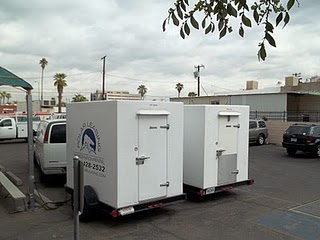 It all started well as we received a couple of trailer units similar to what you may see at carnivals and festivals. We had three – one that served as our freezer and two that served as our temporary refrigerator. Emptying out our old walk-in fridge/freezer and moving all of the food into the trailer units was a great exercise in purging and pitching. We try to go through our walk-in on a regular basis to clean it out, but still we found some things that none of us knew were there. For example, why did we have about 30 fillets of frozen cod in a freezer that stores food to be cooked and served to over 500 people? Was someone hoping for a repeat miracle of the multiplication of the loaves and fish?

At the end of Monday, the first day, the crew was ahead of schedule, and we had a huge hole in our kitchen leading to the dining room where the old walk-in used to be. Being ahead of schedule is a good thing. I wondered to myself whether we would be done in six days as planned and whether we could rest on the seventh day like it says we should in the Book of Genesis. 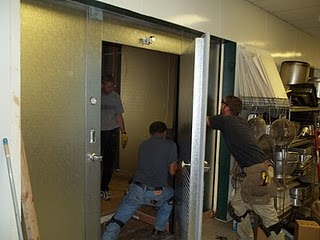 Tuesday got us back onto schedule – which is not always good if you were ahead of schedule the day before. It also brought the challenge of having to raise a steel girder one inch so that the new walk-in fridge would fit under it. Somehow God provided a way for that to happen. God also provided many cooperative hands among our guests and patience by both guests and volunteers. Conscious of how easy it is to complain – and feeling sometimes that we live in a culture of criticism here in the States – I was edified by the fact that I did not hear one negative word and by the way that people stepped up to help out.

Wednesday through Friday found us keeping pace with the project, and learning more about how we can be flexible and adjust to circumstances as they presented themselves. The walk-in was completely assembled, and the crew was busy putting in the actual cooling units. Then came the words I did not want to hear, "Call Steve, quickly. It's leaking." Needless to say, Sunday was not a day of rest.

But in the end, the challenges were overcome. We usually serve the most meals at the end of the month, and this last week of October was no exception. We also found that it is not always easy adjusting to living out of a trailer (or two or three), but with faith, cooperation, and an upbeat spirit, you can see God working in the midst of challenging circumstances. 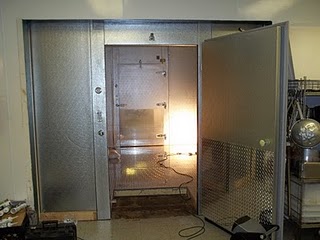 When engaged in a ministry that God wants to continue, trying to give Him food and drink as we give it to the guests who come to our door (see Mt. 25:25), and when living under the patronage of a newly canonized saint, it pays to have faith. Sure, things happened this week that were difficult and challenging. But in the end, we all learned through this project of replacing a refrigerator: Just stay cool … the Lord will help it all to work out.