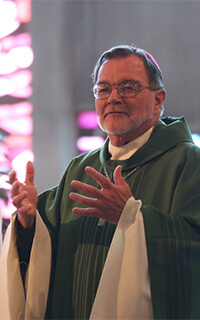 In the Rite of Ordination of Deacons, it says that the Bishop delivers the homily, beginning with the Scripture texts of the day's Mass, and then speaking to the assembly and the candidates about the ministry of deacons.

So I'd like to begin by meditating with all of you, and especially with Ryan and Michael, on today's Gospel which, as happens so often, is so appropriate for the occasion. Then I would like to use the exhortation from the Rite that briefly and beautifully speaks of the ministry of deacons in the Church since apostolic times.

He Gospels show us that Jesus was a great observer of human behavior. During the thirty years of his hidden life before beginning his public ministry, he came to know from within the greatness and the frailty of the human spirit. He saw the light and the darkness that the human heart can harbor. He became familiar with all that makes up our human experience, in everything except sin. 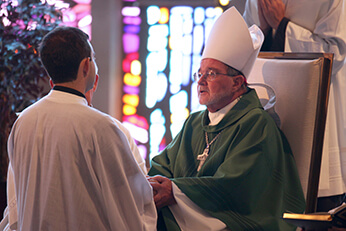 Jesus used the occasions of everyday life as teaching moments. Remember how he sat outside the entrance to the temple and watched as people put their offering in the basket and one day saw the poor widow put in her small offering. It became an occasion for a wonderful story about what truly matters in the eyes of God.

In much of his everyday preaching, especially in the parables, he drew on the events of everyday life and they became the starting point for a conversation about deeper realities. In this way he drew his listeners from things that people knew from their everyday experience into the mysteries of God's kingdom and revealed to them his Father's love.

I somehow imagine that the story Jesus tells in today's Gospel comes from his own experience. Perhaps he had seen someone at the banquet position himself in one of the better places at the table, and then face the humiliation of having to move to a lower place upon the arrival of someone who was deemed more important by the head of the household.

The story becomes an occasion to teach us about humility which is the opposite of self-aggrandizement, self-seeking and self promotion. If we are to follow Jesus we must be like him, meek and humble of heart. Ministry in the Church is not about promoting ourselves, but about going out to others. Pope Francis has called us to go to the peripheries of today's society to those who are excluded, to those who are not recognized in their unique dignity as children of God, to those who are exploited and mistreated. 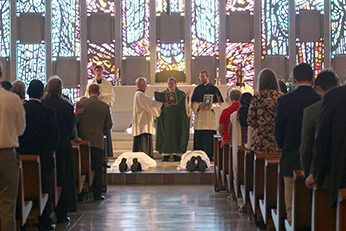 Ryan and Mike, on this day of your ordination as deacons, there are two important lessons to be drawn from today's Gospel.

First and foremost, as deacons you are called to conform your way of life always to the example of Christ. You are called to imitate the humility of Christ the Servant who did not come to be served, but to serve and offer his life for others. He humbled himself taking on the way of a Servant. In a document on the Diaconate from the International Theological Commission, we read that "the distinctive element of the diaconate is the representation of Christ the Servant."

Our own Founder Basil Moreau spoke often about imitating Christ and conforming our lives to his example. He wrote in a sermon in 1856:

"Your whole life should have as its aim to so well assimilate the thoughts, judgments, desires, words and actions of Jesus Christ that you can say with the Great Apostle: "I no longer live, it is Christ who lives in me". And in another sermon he adds:

"In whatever interior dispositions you may be and in whatever life situation you may find yourself, look at your model and apply yourself to imitating Him Walk then in his footsteps and may all your sentiments be conformed to those of the heart of your Divine Master." 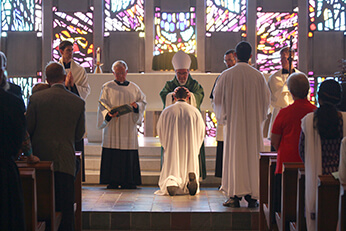 Remember that the first deacons were called to serve the poorest in the community, the widows who were not be appropriately looked after. You are called to be of service to all, but in a preferential way to the poor and the marginalized. Jesus exhorts us in today's Gospel:

"When you hold a banquet, invite the poor, the crippled, the lame, the blind."

"This divine preference has consequences for the faith life of all Christians, since we are called to have 'this mind which was in Jesus Christ' (Phil2:5). Inspired by this, the Church has made an option for the poor which is understood as a 'special form of primacy in the exercise of Christian charity, to which the whole tradition of the Church bears witness'. This option asBenedict XVIhas taught 'is implicit in our Christian faith in a God who became poor for us, so as to enrich us with his poverty'.This is why I want a Church which is poor and for the poor. "(EG 199) 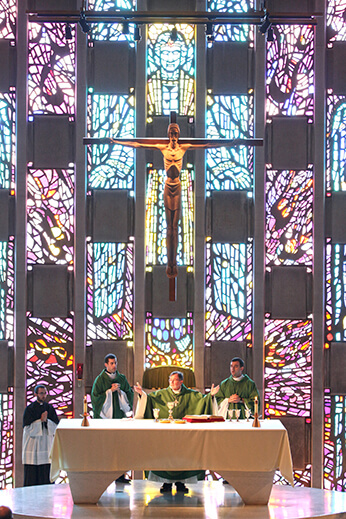 Our own Father Moreau taught: "If at times you have a marked preference for certain people, it should be for the poorest, the most abandoned, the most ignorant, the least gifted by nature If then you surround them with the most assiduous attention, it is because their needs are greater and it is only justice to give more to those who have received less."

The second lesson from today's Gospel is important for you as ministers of the Word. Learn from Jesus, the great Teacher, to link the mysteries of the faith to the everyday experience of the people you serve.

As ministers of the Word, you are first to be hearers of the Word before being proclaimers of the Word. You must always have an ear that is attentive to the voice of the Lord as he speaks to you through his Word. Our preaching has to be rooted in a prayerful meditation of the Scriptures. We must approach the Word of God with a heart and a mind that is open to God's Revelation.

As ministers of the Word, you must also be attentive to the voice and the experience of the people we serve. As Jesus spent those years of hidden life experiencing the reality of his people, we too need to spend time listening and experiencing the reality of our people. We need to listen to their joys and their sorrows, their questions and their struggles. Only in this way will we be able, as Jesus was, to bring the light of the Good News to bear on their experience and help them to discover the presence of God's love in their lives.

Pope Francis speaks of this attentiveness especially to the poor in these words from Evangelii Gaudium:

"This loving attentiveness is the beginning of a true concern for their person which inspires me effectively to seek their good. This entails appreciating the poor in their goodness, in their experience of life, in their culture, and in their ways of living the faith. True love is always contemplative, and permits us to serve the other not out of necessity or vanity, but rather because he or she is beautiful above and beyond mere appearances." (EG 200)

Let me now read to you the instruction from the Rite of Ordination of Deacons.

The first words are addressed to the assembly, family and friends of those who are to be ordained.

"These men, your relatives and friends, are now to be raised to the order of deacons. Consider carefully the ministry to which they are to be promoted. They will draw new strength from the gift of the Holy Spirit. They will help the bishop and his body of priests as ministers of the word, of the altar, and of charity. They will make themselves servants to all.

As ministers of the altar they will proclaim the Gospel, prepare the sacrifice, and give the Lord's body and blood to the community of believers. It will also be their duty, at the bishop's discretion, to bring God's word to believer and unbeliever alike, to preside over public prayer, to baptize, to assist at marriages and bless them, to give viaticum to the dying, and to lead the rites of burial. Once they are consecrated by the laying on of hands that comes to us from the apostles and are bound more closely to the altar, they will perform works of charity in the name of the bishop or the pastor. From the way they go about these duties, may you recognize them as disciples of Jesus, who came to serve, not to be served." 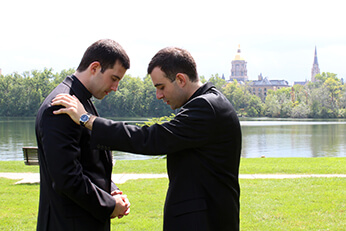 The second part of the instruction is addressed to those who are to be ordained:

"My brothers, Mike and Ryan, you are being raised to the order of deacons. The Lord has set an example for you to follow. As deacons you will serve Jesus Christ, who was known among his disciples as the one who served others. Do the will of God generously. Serve God and humankind in love and joy. Look upon all unchastity and avarice as worship of false gods; for no man can serve two masters. Like the men the apostles chose for works of charity, you should be men of good reputation, filled with wisdom and the Holy Spirit. Show before God and humankind that you are above every suspicion of blame, a true minister of Christ and of God's mysteries, men firmly rooted in faith.

Never turn away from the hope which the Gospel offers; now you must not only listen to God's word but also preach it. Hold the mystery of faith with a clear conscience. Express in action what you proclaim by word of mouth. Then the people of Christ, brought to life by the Spirit, will be an offering God accepts. Finally, on the last day, when you go to meet the Lord, you will hear him say: "Well done, good and faithful servant, enter into the joy of your Lord."

Let me finish by repeating the words of the opening prayer of today's Liturgy. They are our prayer for Ryan and Michael today:

"Lord, make them effective in action, gentle in ministry and constant in prayer."