As I wandered around Moreau Seminary I happened upon Fr. Jim Gallagher as he walked back to his office. I was eager to get together and tell him about my first six months as a Postulant in Holy Cross. After catching up over a nice lunch at Corby Hall, he introduced the idea of going to Rome for spring break. I had been to Rome two years earlier, for Pope Francis's first Easter Vigil, and I leapt at the opportunity to return. 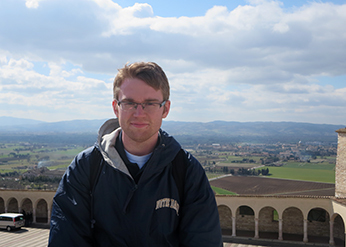 I do not think I will ever get over the scope of St. Peter's Basilica; from the bright, white colonnade reaching out toward pilgrims bringing them into the embrace of the Church to the facade gleaming in the morning sun. Once we entered the basilica I, again, felt overwhelmed by its breadth and depth. It was a privilege to celebrate Mass in the crypt where we were joined by more Holy Cross religious. Afterward, we had a few minutes inside to drift around a bit; mostly with our heads turned upward toward the ceiling. Eventually, I stumbled upon the adoration chapel which lay behind a heavy curtain safe from the flashes of floating cameras.

I sat down before the Blessed Sacrament and considered for a moment how the greatest expression of human creativity and excellence St. Peter's Basilica still does not quite compare to what we claim the Eucharist to be. At first, the Body of Christ seemed fully eclipsed by the marble and gold. However, upon reflection, I realized that the Eucharist was firmly juxtaposed to these things and truly exceeded the craft of human beings. If what we believe about the Eucharist is true, it exceeds anything we might create. 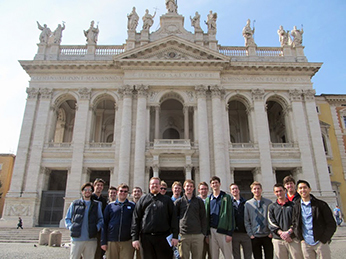 Later on we went beneath St. Peter's for the Scavi Tour. I was taken by the mosaics and grave markers which decorated various crypts. On the markers were carved the names of the deceased as well as Christian images like the labarum. One particular mosaic that stuck out was one of a fisherman and two fish; the first is caught and the other slips away. This is significant because it showed me what I had taken for granted; we are using the same symbols and motifs that our ancient brothers and sisters were using under persecution. This made me appreciate a stronger connection to our predecessors in the faith and how fortunate we are to worship freely.

The Vatican museums were definitely worth the eight euro. From a roof outside the museums, the Dome of St. Peter's appeared as though it were a painting. We moseyed around for a while and only got lost once before coming to the Papal Carriage Pavilion. I was surprised and amused that Pope Francis' famous 1984 Renault had already made it into the museum; I had hoped to see the pope zipping around in it on the streets of Rome. We finished the tour in the Sistine Chapel where I, along with many others from around the world, admired the Creation of Adam, the Last Judgment, and all the rest. 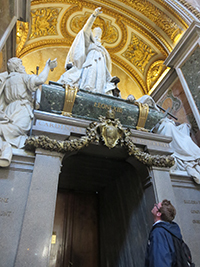 Our trip to St. John Lateran was especially memorable for many reasons. One of my favorite experiences was praying the rosary at the tomb of Pope Leo XIII. I became attracted to his pontificate while a student at King's College. The college seal depicts thirteen rays of light beaming from a star in honor of the pope. His encyclical Rerum novarum is the reason I began studying theology. We also took the opportunity to pray the Scala Sancta the steps of the praetorium of Pontius Pilate which are to be climbed on one's knees. The image reminded me of praying the steps of St. Joseph's Oratory in Montreal. As this season of Lent comes to a close, I have been reflecting on how the pilgrimage concluded.

We ended the week with a penance service inside St. Peter's. Our tired legs and weary eyes were proof of a successful pilgrimage. This trek through Rome is an image of our longer journey as a pilgrim people treading the way to reconciliation with God. Weeks like these culminating in the Sacrament of Penance serve to remind us that we are sojourners working toward reunion with our Father through his Son. The road we must walk is hard and narrow but full of companions and hope.

Mr. Robert Yanik is a Postulant at Moreau Seminary. He and his classmates arrived on campus in August of 2014. Robert is originally from Dallas, Pennsylvania. The postulants regularly contribute to the Spes Unica Blog, sharing their life and experiences in the community.