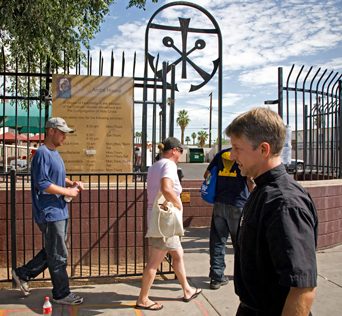 On the eve of the Feast of St. Francis, Fr. Eric Schimmel, C.S.C., the director of André House, shares about two homeless people and their puppies, Dusty and Boots. Along the way, he causes us to examine our consciences regarding what we see and value in our lives.

When I looked at the calendar and saw that I would be writing on the eve of the Feast of St. Francis of Assisi, I wondered what part of his life I could include in my blog. Living and working in a neighborhood stereotyped for being violent, I wondered whether the day deserved a meditation on his famous peace prayer. My personal experience is that the stereotype of violence among poor neighborhoods has a legitimate foundation. But the stereotype overstates the reality, and to only focus on violence misses the many ways that André House guests take care of each other. Those judged by appearance as violent often bring peace to this special place.
Instead of a reflection on peacemakers, I want to focus on something else associated with St. Francis – maybe even more than his prayer for peace … animals. How often do we see images of St. Francis with animals on or around him? How many places will have special blessings for animals at this time of year to coincide with the feast of St. Francis? Of course I have found that these blessings also require St. Francis' intercession for peace, especially as dogs, cats, birds, and other animals gather together in close (and nervous) proximity.
When meditating on St. Francis and animals, I think of the guests at André House who have animals as pets. On more than one occasion people have asked me why someone who does not have enough money to support themselves in a home or apartment would keep an animal. Animals require work. They require money to feed them. Some have asked me whether I thought the homeless should be allowed to keep animals because they obviously don't have the means to care for them correctly.
I often cringe at such comments. Part of my reaction comes from a pet peeve of mine. I believe that language is important – how we speak affects how we think and feel. This is why so much money is spent on advertising and why we even have such a thing as "spin doctors."
I believe that talking about "the homeless" can be dehumanizing. I am not just referring to the natural and subtle depersonalization when we speak in general terms about aggregate groups. I feel like we miss something important when we talk about "the homeless" rather than "people who are homeless" or "homeless people."
When we are talking about "the homeless" or "the poor," I feel like we need to be conscious that first and foremost we are talking about people. I think it is important to remind ourselves of this fact. Jesus said, "Foxes have dens, and birds of the air have nests, but the Son of Man has nowhere to lay his head." Homelessness tends to be a people problem, in all senses of that phrase.
What seems odd to me is that the people who ask me questions about why someone who is homeless would have a pet never seem inclined to ask a homeless person why he/she would want a pet. I had my ideas and opinions based on conversations I have had with guests in the past, but recently I asked my questions again to a couple guests who have two puppies, Dusty and Boots.
Before I get to their answers, I have a question for you. If you have a dog or a cat or some other pet, why do you have it? Companionship? The joy and fun a pet can bring (from its spontaneity, playfulness, unpredictability)? Do you enjoy having something to love and to care for – and to receive love in return? 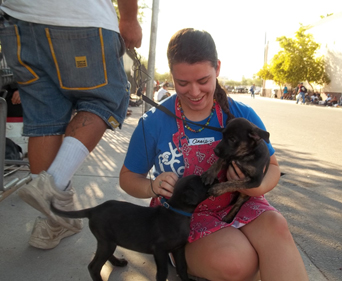 I can assure you that the people I have spoken with who live on the streets also desire the same thing in a pet. They may even want more. The owners of Dusty and Boots enjoy having pets for the same reasons most people do. They enjoy playing with the animals, bonding with them, sharing the love and affection. But there's more. They also want the dogs to be trained as service dogs. One of the owners has seizures, and many dogs can be trained to know when their master is having a seizure and get help.
In conversations with people living on the streets with their pets, I have asked whether they ever felt like people sometimes paid more attention to their animals than to them. The overwhelming response is yes. One person responded to that question with an incredulous tone of voice, "Someone once said to me, 'dogs are people too.' You know, I love dogs and love my dogs, but really. . . we're people." Sometimes it seems like animals have more rights, or at least have more people fighting for their rights, than our brothers and sisters who are homeless.
How often do people walk on by, ignoring the person who is (or looks) homeless who may be trying to pan handle, or who may be crossing through the gas station or the parking lot? But if that person has a dog with them, do we notice them more? Maybe we don't notice the person more, but our attention may be drawn to the animal – and then tangentially to the person with the animal. 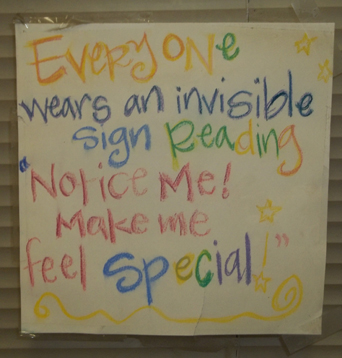 There is a sign that hangs in the wall of the office in our Main Hospitality Center that says, "Everyone wears an invisible sign reading 'Notice me! Make me feel special!'" Is it possible that we have grown so accustomed to not noticing, and that our policies in this country actively push aside and out of view our brothers and sisters who are poor and homeless that sometimes having an animal with them is the only way that they can get noticed again? The dog or cat can be the sign saying to us, "I'm here. Remember me!"
Our brother St. Francis of Assisi definitely loved the animals. But he also embraced poverty and cared for people who are poor. May he intercede for us so that we move beyond a focus on the animals, and increase our focus and care on the people who may feel like they need them.