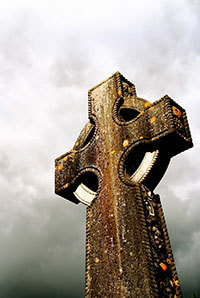 There are many entities in Ireland bearing the name of St. Patrick: Croagh Patrick, Downpatrick, St. Patrick's Football Club, and if all the Holy Wells named for him spouted oil instead of water, we'd be richer than the Saudis. But perhaps the most renowned location is the pilgrimage site of St. Patrick's Purgatory.

St. Patrick's Purgatory is the subject of a poem by Nobel Laureate Seamus Heaney, and of knight's tales in medieval manuscripts on the Continent. Yet, for all that, it is a scant collection of weathered buildings clinging to a miniscule island (600ft at its longest and 400ft at its widest) perched in a lake, Lough Derg, in the remote and barren wilds of Co. Donegal.

Nonetheless, since the 6th Century, pilgrims have come here from all over the world. Even today, for a short 10 weeks of the summer, 15,000 pilgrims will travel annually to make the traditional three-day pilgrimage of fervent penitential practices. Define fervent? Well, a three day fast is interrupted only once each day for a meal consisting of black tea or coffee, dry toast or crackers and if one wishes, the facetiously named 'Lough Derg Soup' hot water flavoured with salt and pepper. Disembarking pilgrims promptly remove their shoes, which might be pleasant when your boat docks on a sandy beach in the Caribbean, but less so when shambling over the slick, jagged rocks. These stony paths circle the broken remains of the huts belonging to the island's first monk inhabitants, around which pilgrims shuffle while reciting a litany of 'Pater Nosters' and 'Ave Marias'. Continuing the custom of ironic Irish appellations, these rocky remains are known as the Beds. Why ironic? Because sleeping is not something one does a lot of at St. Patrick's Purgatory. The central element of the pilgrimage is to commemorate St. Patrick's visit to a cave on the island when, during an extended vigil of prayer, God granted him a vision of purgatory. In ritual remembrance, praying pilgrims go anywhere between 24 & 38 hours without sleeping. Combine all that with the inclement weather of West Ireland, where it only stops raining long enough for the midges to come out and eat you alive, and it begins to seem like it wouldn't be all that surprising if Charon were to appear out of the lake mist during that long night of prayer to ferry you from purgatory across to the eternal shores. 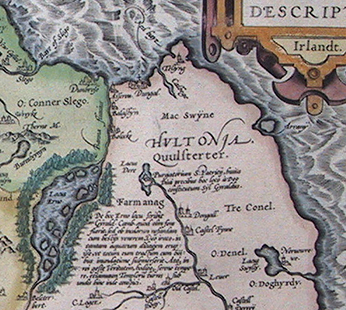 Alright, beyond promotional work for your next vacation in Ireland, why this description of St. Patrick's Purgatory? As our own Lenten penances perhaps begin to drag on us, it is a timely reminder of a core truth that the Church has upheld against overly spiritualising heresies; that the human person can only authentically act as a unified composite of body and soul. There are always those, who oft from the intellectualised vantage point of an 'evolved' understanding of the faith, will label the physical mortification practices, such as St. Patrick's Purgatory, as outmoded, aberrant, perversions of true faith. But St. Patrick's purgatory is just an amplification of something we testify to in every moment of our Christian life.

When we kneel down, that is not just a preamble to making prayers with our spirit. The physical act is as much a human expression of contrition and repentance as the human words we say with our mouths and the disposition we maintain in our hearts. When we mark our bodies with the Sign of the Cross, that's not just some reminder of how many Persons we need to address spiritually.

Human faith can never be just some interior reality, devoid of bodily manifestation, which resonates well with the words of St. James' letter. His emphasis is slightly different; he rebukes those who would neglect the works of mercy by offering a disembodied defence of their faith; as if faith could be demonstrated by a fervent affirmation of confessional formulae. 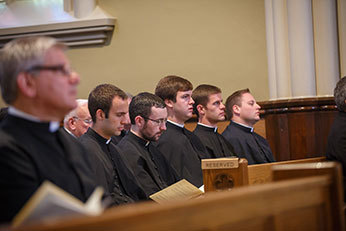 Yet, it is not hard to see how an overly interiorised or spiritualised faith, dismissive of the penitential, the bodily ritual, and the corporal expressions of worship, is odds-on to be bereft of charitable works. Feed the hungry? How can one understand hunger if one has never had their stomach grumble on a day of fasting, with little more than scraps to placate it? Shelter the homeless? What is it to go sleepless through a gloomy, wet night, tired, drenched and cold because one has nowhere to lay one's head? Clothe the naked? What is it to have one's feet ache after treading over rough stone exposed to the elements? Visit the sick and imprisoned? Have many in our culture never experience even one moment cut-off from the rest of the world?

If we have, in some meagre fashion like St. Patrick's Purgatory, walked a mile in another's shoes (or bare feet as the case may be) will we not be more receptive to St. James' exhortation to demonstrate our faith in works of charity? The prayer, fasting and almsgiving of Lent, are not completely separated activities, because we are not separated entities; all three are of the body, all three are spiritual and all three support and sustain one another.

One of the more reliable stories we have of St. Patrick is that on his journeys, if he spotted a Cross in the distance, he would detour to it no matter how disruptive it was to his journey. Fr. Moreau speaks in his writings of 'seeking' out the crosses we can carry, physically and spiritual, the penitential and practical. We need not seek far, for Lazarus sits at our very doorsteps. Will he find in us a faith alive in works, body and spirit united in authentically human action?

Mr. Cathal Kelleher, C.S.C., is in his secondyear of temporary vows with the Congregation of Holy Cross. He is currently studying in the M.Div program at the University of Notre Dame. Cathal is originally from Kilkenny, Ireland.