Our Lady of Guadalupe; I was in front of her. I had heard her story and read it many times. Every year I celebrated her feast day with love. I had waited all my life for this moment, but now I was looking at her in person in the church she wanted to be built in her honor so that people from all over could experience her compassion. She was beautiful! Single-handedly she brought the Aztecs to Catholicism, and she brought together the Cultures of the Spanish and the Aztecs to become one.

According to tradition, the Virgin Mary appeared to an indigenous man named Juan Diego Cuauhtlatoatzin on Dec. 9, 1531, on Tepeyac Hill. The Virgin told Juan Diego to tell the bishop that she asked that a church in her honor be built on the spot where she appeared. Juan Diego went and told the bishop about the apparition and request, but the bishop did not believe him and sent him away. He returned to the hill where he had first met Mary and found her there waiting for him. Asking her to send someone else, she responded: "My little son, there are many I could send. But you are the one I have chosen." She then told him to return the next day to the bishop and repeat the request, and once again Juan Diego was turned away. And again on the next day, Juan Diego returned. Juan met with the bishop who, on re-hearing his story, asked him to ask the Lady to provide a sign as a proof of who she was. When he returned to her she said "My little son, am I not your Mother? Do not fear. The Bishop shall have his sign. Come back to this place tomorrow. Only peace, my little son." On the morning of Dec. 12, Juan Diego's uncle was gravely ill and Juan Diego intentionally avoided the hill so as to fetch a priest to give his uncle last rites. On his way the Virgin reappeared to Juan Diego and ordered him to collect roses in his tilma, (a kind of cloak) on the hill where she had originally appeared. One he had collected them he took them to the Lady and she rearranged them in his tilma. Juan took the roses to the bishop and when he opened his cloak, dozens of roses fell to the floor and revealed the image of the Virgen of Guadalupe imprinted on the inside. Immediately the bishop fell to his knees and believed the message of Our Lady, and construction on the church was started. 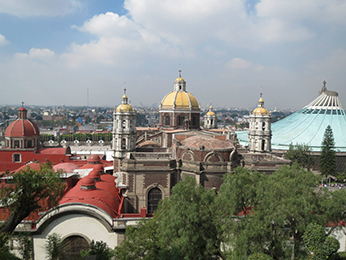 Since the beginning Our Lady of Guadalupe has been an important part of Mexican history. Her image was used throughout Mexican history, not only as a religious icon but also as a sign of patriotism. In 1810 Miguel Hidalgo used her image when he launched his revolt against the Spanish and with his "Grito de Dolores! Long live Our Lady of Guadalupe!" She could be seen on the rebels' banners during the Cristero War (1926-1929). The Cristeros, fighting against Mexico's anticlerical government adopted the battle cry: "Viva Cristo Rey! Viva la Virgen de Guadalupe! (Long live Christ the King! Long live the Virgin of Guadalupe!).

The tilma, is full of symbolism, which the Aztecs would have completely understood and it led millions of the native people in the years after the apparition to convert to Catholicism.

The mantle: The mantle of the Lady is blue-green or turquoise which was the color of the gods and of their royalty.

The angel: The angel carrying our Lady testifies to her royalty. To the Mesoamericans only dignitaries could be carried on the shoulders of others.

The moon: Our Lady's feet rested on the crescent moon. To the Aztecs, the moon was the god of darkness the feather serpent "Quetzalcoatl". Our Lady was showing them that she is more powerful than their god.

The sun: The Aztecs would have recognized this as Huitzilopochtli, their highest god. She is announcing the God who is greater than their sun god.

The sash: The sash around her waist is a sign of virginity. Although in the Aztec culture the bow was the nahui ollin, the flower of the sun, which was a symbol that signified that a young woman was pregnant.

The black cross: The brooch around her neck recalls the passion and death of Jesus Christ on the Cross for the salvation of all mankind.

The day of the Virgen de Guadalupe became a national holiday in Mexico in 1859. In 1945 Pope Pius XII stated that the Virgin of Guadalupe is the "Queen of Mexico and Empress of the Americas. Hundreds of thousands of pilgrims gather each year on the night before and the whole day of Dec. 12 at Mexico City's Basilica of the Virgin of Guadalupe to celebrate the Patron Saint's Feast Day. The Basilica her image is housed in is full of fervent prayer, songs, and supplications to the woman who brought two distinct cultures together and converted a nation.