As I reflect on the events of this past weekend I can't help but smile. There were many times during the liturgies or communal gatherings when I thought to myself; I love being Catholic, and I love being Holy Cross, and these thoughts were not always the result of taking a look at the meals we were about to eat! …Which by the way made Babette's Feast look like dinner with Carthusians during Lent! – That's an exaggeration… 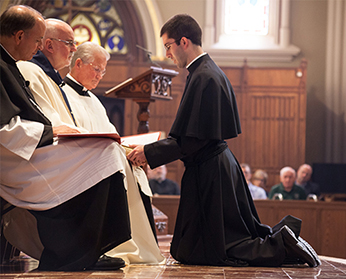 Despite the joy and excitement that filled the air, there were times when I got a little anxious. Witnessing final vows never ceases to stir within myself a mix of emotions. There is something powerful about hearing a brother in community pronounce the words; "Therefore I make to God forever the vows of chastity, poverty and obedience, according to the constitutions of the Congregation of Holy Cross." 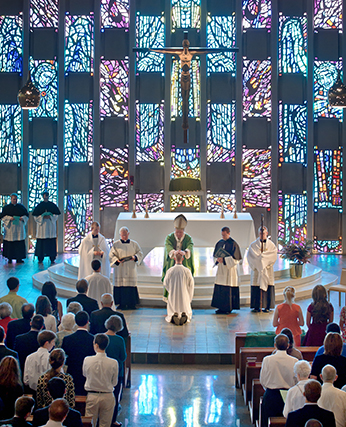 There is surely diversity of feelings that take place at that moment, for the ordinandi ("those to be ordained") of course, but also for those of us who sat in witness: joy, awe, and maybe a little fear. "That could be me kneeling in front of the bishop one day." However, the remarkable thing was that those who had the right to be most fearful or nervous, Adam and Pat, did not seem to be so. Many in the world would see this commitment as foolish, others as too great a sacrifice. However, what struck me most was the sense of peace that dominated the presence of both Adam and Pat as they gracefully moved from one ceremony to the next.

It was no mistake that one of the songs chosen for the diaconate ordination came from the Suspice, which was popularized by St. Ignatius of Loyola in his Exercises. The term Suspice has its roots in the Offertory of the Mass, at the point when bread and wine are offered on the altar. The Liturgy of the Eucharist begins as the priest elevates the paten in offering to God. Suspice ("receive") indicates the point when the priest, in the place of Christ, offers the works of our human hands as well as the sacrifice of himself as alter Christus ("another Christ"). One of the verses goes; "Take my thoughts, O Lord, and my memory. Take my tears, my joys, my liberty. Give me nothing more than your love and grace. These alone, O God, are enough for me."

Though I may have been nervous at points of the liturgy thinking of my own discerning and where the Lord will lead me. I took solace in the fact that Adam and Pat had reached the point to make this step. In their act of commitment to the Catholic Church and Holy Cross they indeed were saying; Lord, receive all that I am, receive all you have given me. In fact, rather than giving off the vibe that they were "giving so much up," they revealed themselves as men who had simply learned to receive a gift. They were ready to receive God's love in a more explicit way, and in the rare moments of life when that happens, it is truly awesome.

Mr. Brendan McAleer, C.S.C., is newly professed, having taken his first vows with five classmates on August 3, 2013. He is an alum of the Old College Undergraduate Seminary, and is originally from Arlington Heights, Illinois.