Teaching without the Training Wheels

Teaching without the Training Wheels 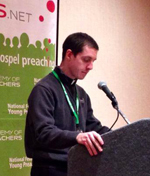 One of my first and persistent attractions to Holy Cross was its work in higher education.As a seminarian, I spent a lot of time imagining myself in one of the U.S. Province's four colleges and universities as a teacher, as a rector, as a campus minister, in a number of different capacities.Since I have been assigned to King's College in Wilkes-Barre, PA, first as a deacon and now as a priest, I have been privileged actually to do all of those things that I spent so much time thinking about! I work in Campus Ministry. I live in and help to oversee a co-ed, upperclassmen residence hall.I have taken on the chaplaincy of the newly-formed men's rugby team. Perhaps the most exciting (and also the most challenging) part of this assignment, though, has been learning how to teach for the very first time.

For the past two semesters, I have taught a 200-level theology class called "Catholicism".You might think that, for someone born Catholic who has been to Catholic schools his entire life and who has just come off of a master's level degree program in Theology, a course on Catholicism of all things would fall right into place.Think again! It is difficult to distill comprehensively and engagingly a two-thousand year tradition of faith and practice into thirty-something, 75-minute packages for a class of twenty-five freshmen through seniors who either aren't Catholic or can't summon the energy to be excited about being Catholic during that full-person slump that takes place right around the 2:00 p.m.hour each day.If someone handed you a class called "Catholicism" and sent you on your way with it, what would you do? 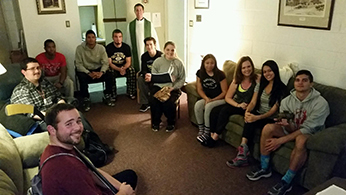 One of the very first lessons that I learned was to drive home single points.Saying something once isn't enough.Making intricate theological arguments, no matter how beautiful you might think they are, isn't enough.It doesn't matter that you've figured out how to use Athanasius' On the Incarnation to demonstrate why the Church that Jesus establishes needs to be "catholic" by virtue of the Incarnation if your students still aren't clear about who Jesus is.They need to be given the opportunity to hold the fundamentals of the faith in their hands and, in a way, to play with them, to toy around with them, to poke and prod at them, over and over again, so that they can discover with each other and for themselves the depth, the intrigue, and the practical value that Catholic doctrine holds out to us.Otherwise, they'll wind up telling you on their final exam that the Incarnation is "the Catholic thing" (cf. the Introduction to Robert Barron's Catholicism) because only Catholics believe in the Incarnation. (That happened.)

What makes teaching worth it are those moments when something obviously clicks for a student.Insights are like supernovae.You may see them happen only once or twice a semester, but when they do, you can bask in them.I had a student my first semester teaching who wasn't top of the class, but he participated.He asked questions.As a result, he got things brilliantly right, and he also got things brilliantly wrong.I loved having him in class. Right after the semester ended, he was back home in Philadelphia when that Amtrak train derailed.It happened a couple blocks from his house, and he wound up being one of the first media respondents on the crash scene.I found out about his involvement via the local news here in Wilkes-Barre, and I e-mailed him to tell him that I was proud of him. When he replied back, he mentioned how jarring it was to be there, but he also said, "If there's one thing I learned in our Catholicism class, it's that God is Mystery, and that's what I have to remember here."You can be sure I tried to drive that point home over and over again this semester. 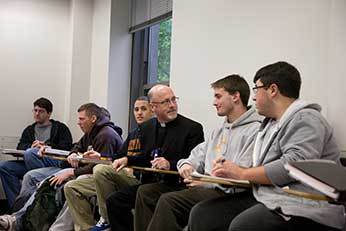 I had not realized exactly how much work goes into teaching a single college course.I could fill a 40-hour work week preparing for, teaching, and following-up from it alone.The students here at King's, however, are unlike students that I have gotten to know anywhere else.The number of students I've met, for example, who struggle academically because, in addition to carrying a full 15-18 credit course load, they run their own self-starter businesses to help offset the increasing costs of an education that their parents couldn't afford but they at least have a shot at it is remarkable. By and large, they don't come from the most advantaged backgrounds, but they're real with you.They're gracious.They surprise you with their ingenuity, resourcefulness, and affection.These are our students, and I thank God every day that I get to be their teacher and their priest.