The Desert of Myself

The Desert of Myself 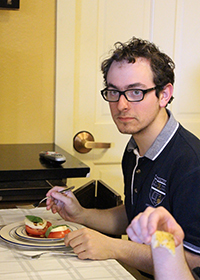 If I were offered a trip to the remotest branch of the Amazon, deep in the wilds of Brazil, knowing nothing of the local flora and fauna, knowing even less than nothing of the indigenous tongues of the region, unaware of what might be lurking by way of ferocious fish and swift-killing bacteria hidden in the murky waters, I would most definitely accept the offer. What an opportunity! It would be an escape to the wilderness, an escape to a land of I-know-not-what. It speaks to something in me, and I suspect in others, that I am not afraid in the least of such a trip. As a matter of fact, survival shows populate the TV channels in great numbers. Why? Because the wildernesses of the natural world are something to be exploredand I want to be the first to go there. Humans are curious. And so, as a human, I am curious. But there is one wilderness of which I am afraid: myself.
Lent is an opportunity to become a "stranger to the city," to borrow a monastic phrase. Called into the desert with Christ, we must confront the silence of the wilderness head on and know where we stand. In the solitude of the desert, in the unfiltered brightness of that noonday sun, our weaknesses are tried and tested. Our failings cannot slink under the bed any longer, waiting to be confronted some other day. It is a time toward which I have had extreme reactions. Growing up, I approached Lent as if it were a full-contact sport: I must give up those things I love the most so as to unite my sufferings with those of Jesus. One year, I tried to give up singingsomething any fellow seminarian, family member, or friend of mine would find unthinkable (I never stop singing)only to find that not only was it utterly impossible, but that it was utterly pointless. It was pointless because it was not bringing me closer to God. Rather, it was a kind of self-idolatry. In my fumbling attempts at giving up things, I was patting myself on the back, congratulating my willpower for its strength of resolve.
This year, the very last line of the Gospel on Ash Wednesday hit me like a Mack truck careening down an icy Northwestern Indiana road: "And your Father who sees what is hidden will repay you" (Mt. 6:18). This is the paradox of the desert: the desert sun is so intense that "there is nothing concealed from its burning heat" (Ps. 19:7); but, even though we are without the benefit of trees, houses, bushes and brush under which we can hide, by nature of its wildness, what we confront will be unseen by all. I am afraid of this inner wilderness more than the natural wilderness, but I must go. Lent is calling meis calling usto an internal conversion. The solitude can be harsh, the silence deafening: but it is here, within our deepest selves, that God himself is waiting for us with open arms. And what we do inwardly, since we are strangers to the city in the city itself, must be lived outwardly. What we change for the good inside us will change us for the better to those whom we love and serve and know. 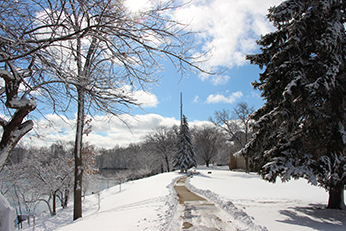 That God is accompanying us on our journey into the wilderness is not to say that it will be easy. Even Jesus himself was tempted in the desert. Our defenses are considerably less than usual. But as I stand with my forehead marked with a heavy cross of black ash, the campus of Notre Dame covered in white snow so bright it's blinding, my eyes are drawn to the foreheads of others, also heavily black against this searing white. We have this black soot on our heads because we know some work must be done. And it's beautiful to know the others are there working too.
I'll meet you at the end.

James Corcoran is a sophomore at the Old College Undergraduate Seminary. James participated in the Summer Scholars program at Notre Dame prior to coming to campus for his undergraduate studies. He is originally from Philadelphia, Pennsylvania.