The Family of Holy Cross

The Family of Holy Cross

"We asked how we might follow, and we found many footprints on the road. A great band of men had passed this way, men who had made and lived by their vows, men who had walked side by side in their following of the Lord, They beckoned us to fall in step with them. We wanted to be part of the family they formed in order to share in their life and work."

-Constitutions of the Congregation of Holy Cross 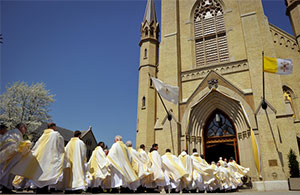 When I first heard the call of Christ to discern His priesthood in an explicit way, I was not sure what that call would mean for my life. Since I had heard this call most clearly while at a retreat sponsored by my diocese, I began by starting a conversation with the diocesan vocation director. I had not had many interactions with priests from a religious order, so I originally thought that I was called to the diocesan priesthood. However, after visiting the seminary for my diocese and praying about it, I knew that it was not where I was meant to be. This realization stunned me, because now I had no idea where I was supposed to be. Divine Providence and some searching on the internet led me to look at the Congregation of Holy Cross. It was among this great band of men that I felt at home.

One of the things that drew me to Holy Cross was the familial atmosphere that I experienced while I visited them. It can truly be said that they "walked side by side in their following of the Lord."

Bl. Basil Moreau, CSC, the founder of the Holy Cross, wished to model his new congregation on the Holy Family. The sisters were dedicated to the Immaculate Heart of Mary, the brothers to the Chaste Heart of Joseph, and the priests to the Sacred Heart of Jesus. Thus, the spirit of the Holy Family was to be the image of what relationships in Holy Cross were to look like. Although the many members of the Congregation today work in various apostolates around the world, they are all united by this spirit. 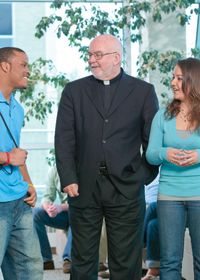 This familial spirit manifests itself in the institutions run by Holy Cross, such as their parishes and universities. For example, Holy Cross religious often live in the dorms of their universities alongside the students. By doing so, the religious is able to offer a unique witness to the love of Christ shown especially in his relationship with His holy family. By living among the students and being present to them at all hours of the day and night, the Holy Cross religious is able to penetrate into the lives of those they serve in an intimate and life-changing way.

It is because of this kind of witness, rooted in the love of Christ, that I feel beckoned to fall in step with Holy Cross. I asked how I might follow, because I wanted to be a part of the family they formed, and share in their life and work.

Mr. Paul Fortin is a junior and originally hails from Peoria, IL. He is in his third year at Old College, and majors in Computer Science