The Feast of the Uganda Martyrs

The Feast of the Uganda Martyrs

Every year on June 3, the church celebrates the feast of the Ugandan Martyrs. St. Charles Lwanga and his Companions, 22 Catholics and 23 Anglicans, were tortured and killed for their faith in Uganda between 1885 and 1887. This day has become a national day of celebration in Uganda and throughout East Africa. The largest celebration is a Mass at Namugongo where the Basilica Shrine of the Uganda Martyrs is located. Millions of people attend this Mass each year (over 2 million were estimated to be in attendance this year), and many of those people make a pilgrimage to the site, arriving on foot from all over Uganda and from as far away as Kenya, Rwanda and Tanzania. 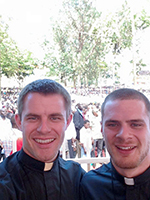 Having arrived in Uganda to spend the summer with the Holy Cross community here a few days before, I was able to attend the Martyrs Day Mass and celebration in Namugongo. I was accompanied by my classmate, Karl Romkema, C.S.C., and Fr. Mike Mathews, C.S.C., a formator here. Our host, Fr. Luke Muhindo, C.S.C., the East Africa Vocations Director, and Emmanuel Isabirye, a Postulant from Uganda, traveled along with us to join the 2 million pilgrims for the Mass and celebration. 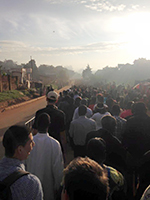 As I arrived at Namugongo on June 3, I found myself swept up in a long line of pilgrims slowly headed into the shrine. The pilgrimage for many had started much earlier and had been much more difficult than mine, but our slow walk together was an expression of our common faith and hope. I have found the short time I have been with the Holy Cross community in Uganda this summer to be similar. Time and again I have been reminded of the long line of Holy Cross men and women I find myself swept up in. These men and women have journeyed long and hard to plant seeds of faith and hope here in East Africa. Thanks be to God for them and for the faith of the Church here.

The Collect for the Feast of the Ugandan Martyrs includes the following prayer:

"Father, you have made the blood of the martyrs the

seed of Christians. May the witness of St. Charles Lwanga and his

countless men and women to live the Christian faith."

Several times during the Mass I looked behind and around me from the seats where the religious men and women, and the seminarians were sitting, and was overwhelmed by the way this prayer came alive in front of my eyes. People were packed into the shrine and surrounding areas as far as my eyes could see men and women, young and old, sick and healthy, African, American, and European. Countless men and women had gathered to celebrate the faith of Charles Lwanga and his companions, but also to witness to the fact that the Catholic Christian faith is alive in East Africa and that the seeds planted by these martyrs' deaths are bearing much, much fruit. 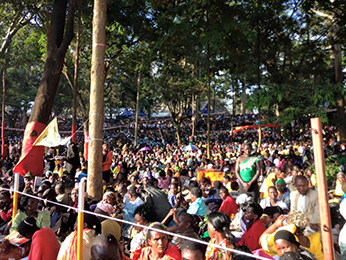 In the days since this celebration, I have gotten to see and experience how the faith and work of many Holy Cross religious is also bearing fruit here in East Africa. I have visited schools and parishes, am staying at a Holy Cross formation house, and have met many Holy Cross brothers and sisters, priests and seminarians, whose ministries are the direct result of the seeds planted by missionaries many years ago. While these men did not share the same fate as Charles Lwanga and his companions, they sacrificed and gave much of their lives to the people and the Church here.

Mr. Brogan Ryan, C.S.C., is entering his second year of temporary vows with the Congregation of Holy Cross. He and his fellow seminarians will spend the summer traveling and working in variouslocations until the fall of 2015, when they will return to the University of Notre Dame to continue their studies. Brogan is originally from Columbus, Ohio.