The Sermon on the Street: You must be out of your mind!

The Sermon on the Street: You must be out of your mind!

For two years, Fr. Eric Schimmel, C.S.C., has been serving as the Director of André House – a ministry of Holy Cross serving the poor and the homeless in downtown Phoenix. From his ministry, Fr. Eric has some amazing stories about grace and blessing, and he will share some of those stories with us in this series the first Tuesday every month. In today's post, he shares a funny encounter with one of André House guests that led him to realize who is really of out their minds.

I was sitting in the Pascente Office at Andre House in downtown Phoenix, AZ, when one of our guests appeared in the doorway. "What time is it?" he asked. I looked over at the clock on the wall, then turned back to him and said, "It is 2:30." "You must be f---ing out of your mind!" he shouted on his tip toes with arms flailing. I looked back at the clock and just said, "No. It's 2:30."

In the last 2 plus years that I have been ministering to our guests who are poor and homeless, I have grown accustomed to encounters with people that do not follow your usual script. Unfortunately, several of the people we serve at Andre House struggle with different levels of mental illnesses, some complicated by substance abuse that may very well have taken hold via an instinct to fix a chemical imbalance, but trying to do so with the wrong substances.

But, truth be told, I became accustomed to things not following normal "scripts" years ago. Most people do not see it as "normal" for a young man to consider a religious vocation. It is especially not "normal" to say that you want to profess vows of poverty, celibate chastity and obedience. 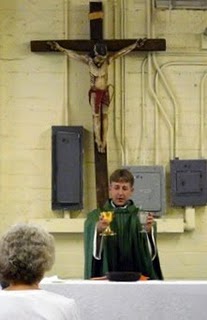 Just as the world may say that it is not normal to want to be a priest, many would say that it is not normal to say that you want to work at a homeless shelter or soup kitchen. A couple of years ago we had a young person sign up to volunteer on our soupline where we serve over 550 meals a night. She parked in our parking lot, looked around briefly, and then drove right home without getting out of her car. By the grace of God she came back later. Not only did she eventually get out of her car, she served on our staff for a year. I fully believe that she came back because the Lord called her back. And she answered the call.

I feel like the Lord slowly invited me to take on the challenge of being the Director of Andre House through different experiences that I have had in life and in ministry.

When I told some people that I was going to move to downtown Phoenix to work at Andre House, most were supportive. Quite a few said that they wanted to help in the ministry. Not so many say that they want to live with us and work with us full time. In fact, I remember clearly the look on one woman's face in a restaurant when I told her where I was going. She was a retired police officer and just raised her eyebrow and said something to the effect of "you really are going to be among the lowly." 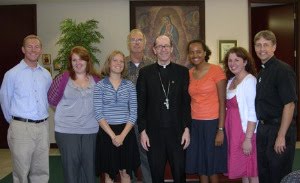 I knew that I was going to be living among and ministering to people that others stereotype and/or write off completely. I did not know when I first arrived at Andre House how much I would be ministered to by our guests who come to use our services. I also did not know how my ministry at Andre House would solidify my belief in the goodness of people. God formed us all in His image and likeness. I am blessed to see the face of Christ every day – not just in the many volunteers who come to help us daily. Most often I see Christ in our guests. This year I hope to share with you stories of Christ among us – Christ in the breadlines, in the showers, and even in the phone office. Christ is the one who works with us and through us at Andre House. To not see Him, I would indeed have to be out of my mind.