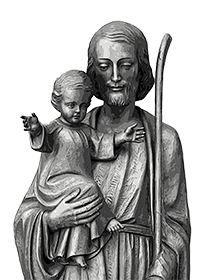 Before this Postulant year, March 19th only meant two things for me. Firstly it was my sister Alyssa's birthday, which undisputedly took precedence over household proceedings for that day, let alone the entire week surrounding it. Aside from that, St. Joseph's Day was simply a day lumped together with St. Patrick's Day for Parish Potluck Dinners, much in the same vein as Washington's and Lincoln's birthdays have been combined to form the ever-popular Presidents' Day. And if you have the fortune to attend one of these potluck-type dinners, especially in the New York metropolitan area where I grew up, you will always find an overabundance of St. Joseph's Day Zeppoles. Similar to the corned beef, it is one of those items on the menu that is often overlooked because of its commonality on that particular day, yet it would be glaringly obvious if none were available. It certainly would not be St. Joseph's Day without St. Joseph's Day Zeppoles, and yet barely half of them are touched and the rest are discarded by the end of the day. In a way, this sideline namesake staple of St. Joseph's Day provides an inadvertent understanding of St. Joseph's example in our lives. Sounds weird, I knowbear with me for just a moment. 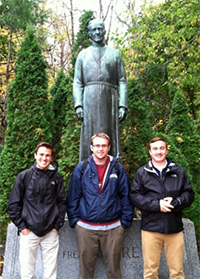 Fast-forward to the mid-semester break in October of 2014 and I found myself embarking on a pilgrimage to St. Joseph's Oratory through Notre Dame Campus Ministry with about 50 other undergraduate students. The original inspiration to take part in this pilgrimage was to come to better know the legacy of St. Andre Bessette, currently the only canonized saint who was part of the Congregation of Holy Cross. From what I knew pre-pilgrimage, St. Andre was attributed to many miraculous healings and his fame as a religious grew so great that he was able to help fund the construction of St. Joseph's Oratory, a shrine and basilica dedicated to St. Joseph, on the crest of Mt. Royal in Montreal. This appreciation of St. Andre's ministry on earth was magnified by the first-hand experience of this pilgrimage.

The Oratory itself is monumental in its size and design. As my classmates and I prayed up the pilgrims' steps from the base of the hill to the main entrance of the Oratory, it seemed like an endless distance away. Stunning architecture aside, the truly astounding aspect of the time spent at the Oratory was found on the inside. At the lowest level of the Oratory is the crypt where St. Andre is interred. In order to reach this point, one must cross through a large hall where numerous prayer candles illuminate entire walls lined with the abandoned crutches and canes of people who were healed with the help of St. Andre's intercession. Reflecting on this experience, however, the most striking part of this room were surprisingly not those hundreds of signs of God's providence, amazing as they are. Instead, in a larger perspective, these crutches and canes lined the spaces between shrines each devoted to a unique aspect of St. Joseph's patronage. As St. Andre frequently insisted throughout his lifetime, "I am nothing...only a tool in the hands of Providence, a lowly instrument at the service of St. Joseph." As St. Andre certainly desires it to be, this pilgrimage became just as much a journey of discovering St. Joseph as it was a discovery of St. Andre. 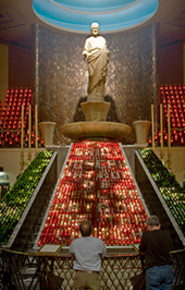 So what exactly do the examples of these two saints tell us today? In spite of my Catholic upbringing, St. Joseph was at best a sideline character in my devotional life. At the same time, though, I think that is what St. Joseph wants more than anything elseto be recognized on the sidelines, in the periphery of the Nativity, serenely smiling and letting the Blessed Mother and the Christ Child take center stage. Perhaps the lesson that St. Joseph and St. Andre teach us is one of humility in the face of Divine Providence. In large part our definitively American sensibilities urge us to always strive to take the lead role and be the star of the show, that being on the sidelines is inherently bad because it demonstrates weakness. And yet St. Andre and ultimately St. Joseph show us that the Lord works through all paths of human life, even the quiet ones that often go largely unnoticed by the rest of humanity. St. Andre chose St. Joseph for this reason: just as he, Andre, felt largely abandoned and unnoticed in his early years spent mostly as an orphan, he felt a devotional attraction to the member of the Holy Family who often also goes unnoticed and who quietly assents to this role.

Nearly every aspect of the account of St. Joseph in the gospel is silent. Even in his righteous indignation, St. Joseph chose to quietly divorce Mary before an angel of God spoke to him and convinced him otherwise. Although we often forget about the "St. Josephs" in our own lives, when we really stop and prayerfully reflect on them, we come to find how vital these "strong silent-types" are to us. Just as the hundreds of canes and crutches silently line the walls of the crypt of St. Joseph's Oratory; it is from this quietude of the soul, just like St. Andre and St. Joseph, that God's voice is truly heard in our lives.

David Smith is currently a Postulant at Moreau Seminary. A former Keough Hall resident, he graduated from the Unversity of Notre Dame in 2014. David is originally from Wantage, New Jersey.