The Vocations of father and Father

The Vocations of father and Father 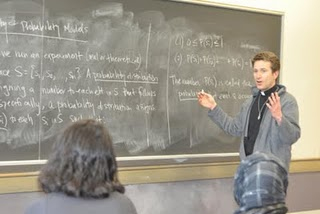 He's back! Yes, we are very happy that Fr. Charlie McCoy, C.S.C., Assistant Professor of Mathematics at the University of Portland, has signed up for another year posting on Spes Unica. (To read some of Fr. Charlie's insightful past post, look under the "Education" label.) With his first post of this new year, Fr. Charlie picks up right where he left off -- leading us on deep reflections about what it means to be a priest, religious, and professor. Enjoy!

This summer I spent the month of July back at Notre Dame to do some research in logic with colleagues in the math department. Fr. Neil Wack, the pastor of Christ the King (where I had been a deacon three years ago), was nice enough to invite me back to say a couple of Sunday Masses. It was great to catch up with old friends in the parish, and many of them wanted to know about my life at UP. One of them half-jokingly remarked, "They must love having you teach at the university, because they don't have to pay you, right?"

When I replied that they paid me the same salary they'd pay any professor, some eyebrows in the group went up, as if to say, "But what about your vow of poverty?" I explained that the salary of every Holy Cross religious went directly to the Province to take care of all of our needs, including the seminarians who are studying and the retired priests and brothers who no longer work. 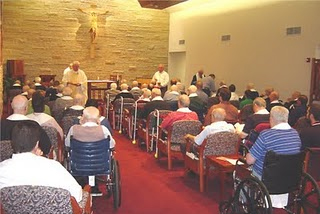 While doing my research, I lived at Old College, our undergraduate seminary. It was a "win-win" situation, because I got to stay within a five minute walk of the math department, and I served as an older presence in the house, while Fr. Steve Lacroix, the Director of Old College, assisted for the month at our parish in Austin, TX. Part of my responsibilities included domestic concerns like looking out for maintenance problems, shopping for the house, and providing the Old Collegians on campus with a regular schedule for prayer and Mass (and an occasional trip out for ice cream).
During the month, I made a couple of short visits to Holy Cross House, our community's nursing home. One afternoon I made a longer visit with a priest who had been a great friend to me during my years in seminary. Time in his presence is still a great blessing, but it was difficult for me to see that his health has deteriorated pretty seriously. I regretted that it had been about three years since I had seen him last, and I dearly hope that I'll get to visit with him again.

What does the vow of celibacy really entail for a religious priest? In some sense, it certainly does "free us for the Kingdom": when the Provincial asked me almost three years ago to move from South Bend, IN to Portland, OR, I didn't have to think about the move's impact on a wife or kids, so it was much easier for me to say yes. 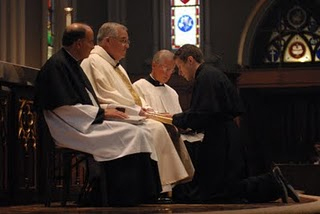 But our vow of celibacy doesn't free us at all from adult responsibilities or human connections. As I think about being a "breadwinner" for my C.S.C. family, and taking "the kids" out for ice cream, and suffering with the reality of an aging loved one, it becomes clearer to me that the vocations of father and Father aren't as different as I once had thought.