There's a Wideness in God's Mercy

There's a Wideness in God's Mercy

When I was in 7th grade, a friend and I were horsing around in the basement rec room of my parent's house and we fell against an antique table and broke its central leg in half. We were petrified because we didn't want to tell my parents that we had broken the table. So we found an old extension cord and wrapped it around the leg to keep the table together.
For years, every time my family used the table, I feared it would break and my parents would find out that I had broken it. Gradually, as the years went by and as the table continued to hold up (Thanks be to God, and my friend later became an engineer!), I forgot about my repair job. Then, one day when I was in college, I was doing some studying at the table, while my mom was doing laundry in the next room. Sure enough, after almost ten years, the table came crashing down with a big bang. When my mom came running into the room to see that had happened, I finally had to tell her the truth. It was relief to finally get that off of my chest. When I finished my sad tale, all she could do was laugh and say that she had known about the broken table for years and was wondering when I was going to tell her about it. It was the best laugh that I ever heard! 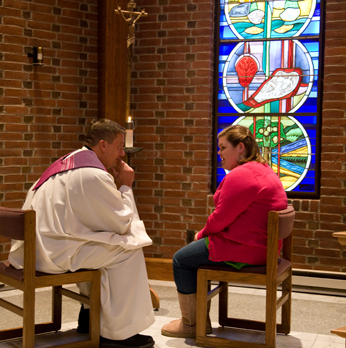 Wouldn't it be wonderful, if we could always expect forgiveness, no matter what we've done or how much time has passed? Well, our faith tells us that we can. One of the wonderful joys of being a priest, particularly during the Season of Lent, is that I am able to impart the loving forgiveness of God through the Sacrament of Reconciliation. I know in my own life how wonderful it is to hear: "I absolve you from your sins, in the name of the Father, and of the Son and of the Holy Spirit." That kind of forgiveness always leads me more deeply into the love of Christ, who is willing to suffer and die for us, not because we are perfect, but because we are still sinners. God already knows our sins. When we are sorry, He's just waiting to share his forgiveness with us. It's like hearing my mother laugh over a broken table.

Fr. Tony Szakaly, C.S.C. is the local superior of the Holy Cross community at Stonehill College, Director of Campus Ministry, and Alumni Minister at Stonehill College. A South Bend native, he received a Holy Cross education at every level of his schooling, from the C.S.C. sisters in grade school, the C.S.C. brothers in high school and C.S.C. priests at the University of Notre Dame. He took final vows in 1991 and was ordained to the priesthood in 1992.