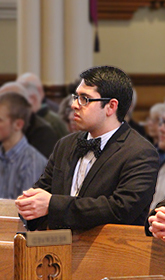 Every time I say the angelus, and the words "The angel of the Lord declared unto Mary; and she conceived of the Holy Spirt" are said all I can think of is what Mary must have thought when the angel Gabriel appeared to her and told her that she was to be the mother of God. A million thoughts going through her mind at what Gabriel had just said to her.

Mary committed to a lot when she said yes to what God had asked of her. Yet her response was one that showed great faith in the Lord and his plans for her. "Behold, I am the handmaid of the Lord. May it be done to me according to your word" (Luke 1:38). Mary surely knew that her yes would change things in her life and that there were to be problems when Joseph would find out that she was pregnant with Jesus. She knew that there was the possibility that Joseph would divorce her or worse, hand her over to the authorities and have her stoned to death for being "unfaithful" to Joseph, yet she trusted God's plan for her life. Blessed Mother Teresa of Calcutta so beautifully put it when she stated that "Mary showed complete trust in God by agreeing to be used as an instrument in his plan of salvation. She trusted him in spite of her nothingness because she knew he who is mighty could do great things in her and through her. Once she said "yes" to him, she never doubted. She was just a young woman, but she belonged to God and nothing nor anyone could separate her from him." 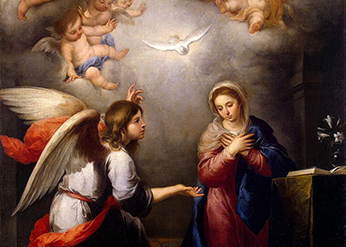 Through her "yes" to God, Mary became the New Eve. As Saint Irenaeus wrote "The knot of Eve's disobedience was untied by Mary's obedience: what the virgin Eve bound through her disbelief, Mary loosened by her faith." Through Eve's disobedience to God we lost paradise and we have fallen into sin. But through Mary's obedience to God's will she gave birth to our Savior and it is he who frees us from sin.

Unlike the reaction of Zachariah, Mary believed what was said to her announcing the birth of her son. While Zachariah and Mary were both troubled at the words of the message given to them, it was Mary who pondered the words said to her. She took them in, and reflected upon them in her heart. Mary's yes was not just a one-time thing, it was a daily commitment to God's plans for her life. It was a daily yes of faith during the first thirty years of Jesus' life, washing, cooking, teaching, and watching our Lord grow without seeing anything extraordinary being done by Jesus. This daily yes then continued throughout Jesus' years in public ministry, and through his Passion, Death, and Resurrection.