Like most estates in New England, the Ames Family property that the Congregation of Holy Cross purchased in the 1930's, not only had a beautiful mansion, indoor tennis court, swimming pool and squash courts, it was also a working farm. In particular, the estate was famed for its herd of prized Guernsey cows. Holy Cross obtained the property to establish a seminary for the large number of vocations coming from the Eastern United States. Soon, a college was begun and the family mansion became too crowded to house the college, the seminary, the Mission Band and the community residence. 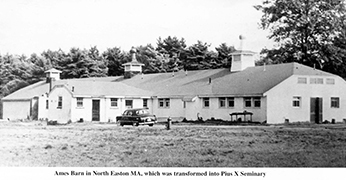 One summer in the early 1950's, all of the seminarians were sent over to the old cow barn with hammers, nails and boards. Soon they converted the cow stalls into bedrooms, the hayloft into a chapel and the area outside of the bull pen into a kitchen. And by the time school started again, the St. Pius X Seminary was open and ready for a new class of seminarians. The cow barn continued to be used as a seminary until the beautiful new seminary was opened in the early 1960's. Who would have thought such a transformation was possible? 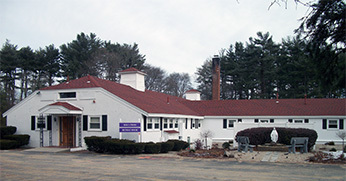 After the seminary moved, some Holy Cross priests had another idea of how to use the old cow barn. They saw a need for a retreat center in the area and soon they and a group of dedicated lay colleagues grabbed their tools and began renovations which included the addition of an old army barracks which they picked up at auction. That retreat house is still going strong 50 years later. Who would have thought such a transformation was possible? 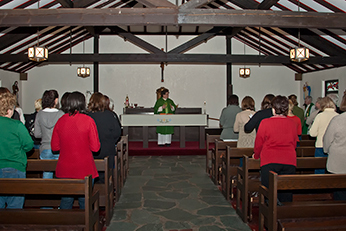 Every time that I look at this wonderful old building, I am reminded of how God works in our lives. If we freely offer God what we have and are, placing all of our gifts and talents at his service, he will take what we offer and make something beautiful of us. In high school, I never would have dreamed that I would have done the things that God has allowed me to do: pastor, assistant provincial and steward, and now Campus Minister. I am always amazed that he could take me with all of my foibles, mistakes and sins and allow me to help build his kingdom. Who would have thought such a transformation was possible?

Fr. Tony Szakaly, C.S.C. is the local superior of the Holy Cross community at Stonehill College, Director of Campus Ministry, and Alumni Minister at Stonehill College. A South Bend native, he received a Holy Cross education at every level of his schooling, from the C.S.C. sisters in grade school, the C.S.C. brothers in high school and C.S.C. priests at the University of Notre Dame. He took final vows in 1991 and was ordained to the priesthood in 1992.